This year, several performers crowdfunded their shows at the Edinburgh Fringe.

Yesterday, I was in Brighton for the launch of registrations for the Brighton Fringe festival.

The crowdfunding site Zequs are saying that they will give £500 each to the first ten people who raise £1,000 for their shows via the Zequs site.

And, in a reassuring marketing wheeze, they cleverly point out that crowdfunding is not new – the plinth for the Statue of Liberty was financed by crowdfunding. 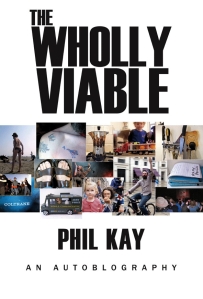 It certainly seems to be on the rise.

Last Saturday, I was at the launch of comedian Phil Kay’s crowdfunded book The Wholly Viable at the Soho Theatre, despite the fact I seem to remember there were two launch gigs for it at the Edinburgh Fringe back in August.

Still, it is being promoted by publicity maelstrom Bob Slayer. 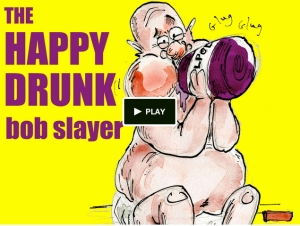 Bob Slayer appeals – not very soberly – in a Kickstarter video

His book is called The Happy Drunk and he aims to raise £666 (I wonder where that number came from?) and, at the time of writing, he has already raised £481 with 12 days still to go.

The Happy Drunk is sub-titled Bob Slayer: The Baby Years and Bob’s pitch is: “Got kids? Here’s how to start them on the booze!”… “I don’t know why this was rejected by my publisher,” he says. “You can receive rewards of exclusive artwork, a caricature, a show in your own home, a magical mystery tour… even your very own baby… all of which will help make this project happen…”

The original title of Bob’s book

The book was originally titled Calpol Is Evil, but Bob surprisingly changed the title.

The book, says Ian, “shares eleven years experience of producing shows at the Fringe for the price of a café latte, without the social awkwardness of having to sit with the author in a coffee shop – highlighting the author’s personal experiences of half-full houses, flatmates gone bad, hostel horror stories, campsite calamities, and general comedy cock-ups.”

“Why update it?” I asked Ian yesterday. “Surely advice about putting on a show at the Edinburgh Fringe two years ago is much the same as today?”

“The principles are the same,” he told me. “but some of the information has changed. Things like the price of ads in the Fringe Programme and the PBH Free Fringe have a voluntary contribution for their shows.”

“Ah, that’” I said, is one of the advantages of eBooks and publishing on demand: you can update facts immediately for new purchasers of the book.”

“And,” said Ian, “everything new which I’ve added, I have put online. Both the Kindle and the on-demand printed version have an address in them which tells you where you can find the updates on-line. It would be a bit unfair if you had to pay for small updates.”

“I got the 814 figure by searching the official Fringe site for free comedy shows, but the Chortle and the British Comedy Guide websites actually listed over 1,000 shows: so those extra ones obviously listed themselves on those websites but didn’t pay to list themselves in the Fringe Programme.”

“So,” I asked Ian, “if I ‘m a performer thinking of going to the Edinburgh Fringe for the first time next year, why should I buy your book?”

“It will probably save you £300 or £400,” replied Ian. “The secret to making money at the Fringe is knowing how to not spend money unnecessarily. One Fringe publication was offering – for £100 – to put your ad on a webpage that got 10,000 impressions. But I remember from 2011 – the year of ‘Cockgate’ – when I took all those photographs and put them on my blog site… I thought I’d put an advert for my show down the side of the page…. I did… I got 14,000 hits on that page on the first day and I got two clicks on the ad… and one of them turned out to be Ashley Frieze, who I was sharing a flat with.”

“OK,” I said. “Let’s say I’m going to perform at the Fringe for the third time next year. Why should I buy your book?”

Ian Fox – now over a decade at the Edinburgh Fringe

“I probably can teach you some stuff, but there’s also loads of stories in there and some of the history you might not know, people’s failures. It’s not just a technical guide; there’s loads of anecdotes. There was one year when me and Ashley were putting free tickets for our shows in the Half Price Hut and people were getting them, even though the tickets were free. It’s just an extra outlet, another way of advertising a show – our show came up on the LED board outside the Half Price Hut – Shows starting in the next hour… There’s loads of tips like that in the book.”

“Do you know what show you’re doing yourself next year?”

“Sort of. I read that blog of yours about the more interesting shows being less straight-stand-up. I’m definitely going in that direction: that it’s not totally straight stand-up.”

“You could do burlesque,” I suggested. “Stripping in a sequin dress. I’d pay to see it.”

“I’m definitely not doing that,” laughed Ian, “though I once did a video with Mick Ferry. He used to do a show in Manchester called Mick Ferry’s Space Cadets and, every month, the audience used to set him a challenge and, because they’d had a burlesque dancer on in a particular show, they said he had to be a male burlesque dancer. I used to make videos of his challenges – shoot them on the Monday for the gig on the Tuesday. They’re on YouTube and on the videos page of my website.”