When things go wrong for comedians 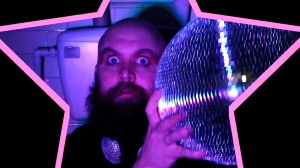 I was happily dozing off last night when I got woken up at 1.30am by a series of text messages from comedian Bob Slayer.

Cobbled together, this is what he told me:

“I did two gigs with The Greatest Show on Legs / Martin Soan at Dave’s Leicester Comedy Festival tonight: an early show and a late show in Dave’s Curry House.

“It is always weird when you meet people involved with a gig and get on with them, have a laugh, then the gig goes wrong and they don’t want to look you in the eye. And other comics avoid you in case your dose of the unfunnies is catching. If you are sharing a car it can be a painful journey.

“The first gig was really struggling. But then it got to a bit which always goes down well: Martin’s Thriller sketch where we put elastic bands round our heads to distort our faces into zombie masks while we dance to Michael Jackson’s Thriller.

“Except that, when Martin cued the music (at which point we are already committed to the Michael Jackson zombie dance) instead of Thriller, the music that came on was Black or White. It was the wrong track on the CD.

“The audience just looked at us, confused, while we did our dance, putting rubber bands on our heads to distort our faces and dancing like zombies to Black or White. They didn’t know it is the wrong track. It just seems very strange to them.

“Afterwards, one of the acts told me he was watching and thinking: Are they making a statement about being black? With elastic bands????

“Fortunately, at the second gig, we got the right track and the gig went beautifully.

“The drive home was lovely.”

Is Labour Party leader Ed Miliband the junkie twin of Shrek with some unprintable birth defect?

We live in a world where computer animation can do almost anything and I saw a BBC News Channel report last night in which a disabled human being could control the movements of his own wheelchair by his thoughts alone. But I think Pixar and/or Disney and the scientists have gone a step too far in creating a deformed cartoon character and making him leader of the Labour Party in the UK.

What has happened to the Labour Party’s image-control and PR sense and why are the media not talking about how just plain ugly and/or weird Labour leader Ed Miliband and Shadow Chancellor Ed Balls are? With the Conservative Party’s new-found PR confidence, Labour is now on a hiding to nothing.

Ed Miliband looks like a slightly slimmer, emotionally-distraught version of Shrek, stumbling about what to him is the alien world of Planet Earth.

Young Ed seems barely out of short trousers and looks like the type of slightly-swottish and humourless schoolboy who gets remorselessly picked-on by bullies. His equally alien-looking brother, the politically-deceased ex-Foreign Secretary David Miliband, was odd enough. He looked like an unholy cross between an unblinking starey-eyed zombie and an automaton from some 1920s German silent movie. I always half expected the front of his face to fall off revealing a mechanical interior, like Yul Brynner in Westworld.

Neither Miliband brother has any visible warmth. But Ed Miliband looks worse.

Yesterday, the coalition government did a u-turn when it announced it was not going to privatise 258,000 hectares of state-owned woodland in England. I have no more idea than anyone else what a hectare is – it sounds like a small woodland creature with long sticky-up ears – but it also sounds quite large; I mean the land area, not the woodland creature.

The point is that the Environment Secretary, Caroline Spelman, stood up in the House of Commons in a light beige jacket with a light pastel scarf round her neck and said in a gently serious voice: “I am sorry, we got this one wrong, but we have listened to people’s concerns”.

Labour MP Gerald Kaufman, always a surprisingly unsympathetic speaker on TV when you consider he used to write for the TV satire show That Was The Week That Was, tried to criticise this as a “humiliating climbdown”.

Caroline Spelman said: “It is only humiliating if you are afraid to say sorry. We teach our children to say sorry.”

This is PR gold dust. It’s a brilliant piece of pre-prepared PR writing.

I have never understood why admitting you are doing a u-turn on a policy has been a no-go for all political parties for so many years. If you phrase the u-turn as a caring, listening, party-of-the-people apology and get the tone right, the public will lap it up.

On the other hand, if you get not just the policy but the party leader wrong, you are dead in the water.

On TV last night, I watched Ed Miliband try to mouth off about the coalition government’s change of policy and, as usual, I could not pay any attention to what he was actually saying because I was utterly mesmerised by his mouth.

When Gordon Brown first became Chancellor of the Exchequer, I had trouble listening to him because he appeared to have been trained to talk in easily-assimilated short phrases and mini-sentences by sticking his tongue into the inside of his cheek when the pauses had to be made. He gave new meaning to the phrase ‘sound bite’. He got slightly less obvious about this by the time he became our unelected Prime Minister, but it was still there and still slightly distracting at the time of his political demise.

Ed Miliband has desperately emotionless fish eyes which stare like someone who has just seen his entire family die in an intense house fire and his lips have a strange rubbery-out-of-control mind of their own. Last night I had no idea what he was saying. His lips had taken on a mad, OTT cartoon life of their own, separate from the rest of his face, as if drawn by a cartoonist on a very strong and very demented acid trip. His upper and lower lips moved around independent of each other and independent of his face, sometimes leaping sideways, upwards or downwards, unrelated to the sounds coming out.

Has he had some terrible accident or did he have some awful birth defect the media are too polite to tell us about? It is like we are watching a man with a mouth being attacked by Pixar and eyes added on by CGI from the shark in Jaws.

Firstly, how can any political party seriously expect to get votes from the notably humour-loving British public when their Shadow Chancellor is called Balls. But then, to add another impossible layer to their chances, Ed Balls – who looks not unlike Fred Flintstone forced to wear a second-hand business suit –  appears on TV to be a charisma-free zone who, like the Miliband brothers, tries not blink on camera – it’s a trick I think some politicians may have learned from Hitler’s filmed speeches. Hitler was an exceptionally good public speaker who had trained himself not to blink on camera to create an even greater aura of self-confidence. I read that Tony Benn copied this media trick of Hitler’s, though not his policies.

Ed Balls (unlike Hitler) has an emotionless feel and, although there’s not much he can do about being bulky, he fails to overcome this when he tries to smile with his eyes: it merely makes him look like a ‘heavy’ enforcer for some dodgy East End protection racket – and it’s slightly reminiscent of Gordon Brown’s unfortunate and terrifying attempts to smile on camera.

Compare the dead-eyed Miliband brothers and Balls to the on-screen personas of Prime Minister David Cameron (slightly eager and well-meaning public school boy) and Chancellor George Osborne (a bit of a smug prefect from a family with no money worries, but probably efficient).

And add to all that the fact that the Conservatives landed on their feet when they had to go into coalition with the Liberal Democrat Party.

The Conservatives faced a terrible future of having to make vastly unpopular financial cuts to basic services because of the state of the economy. But it turned out the coalition allowed them to deflect a large percentage of public anger onto the Lib-Dems

All three parties have problems, but the Conservatives have re-discovered their power over PR and image control. The Lib-Dems have a problem by seeming to go back on Election promises. But the Labour Party is in a worse position. It has lost its grip and has insurmountable problems until it dumps Ed Miliband and Ed Balls and finds some new acceptable face of socialism.

And, my dear, that gaunt look with the staring eyes! Heroin chic is just SO last century.