How the Edinburgh Fringe is financed: the article which you cannot read in this morning’s edition of The Scotsman 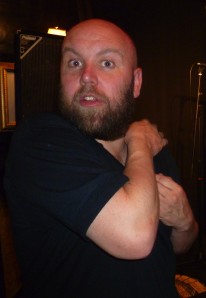 Comedian Bob Slayer was asked by The Scotsman newspaper to write a piece about the way the Edinburgh Fringe is financed.

One week ago, they told him it would be printed in today’s issue. Yesterday, they told him they had decided not to run it. This is the article they are not printing for whatever reason…

Edinburgh Fringe’s magnificent choice of shows comes along with a rainforest of media and PR which aims to persuade us to see this show or that. Of course we all ignore that nonsense and seek out shows based on friends’ recommendations, reviews or other factors such as venue or price.

Surely the better shows are in the bigger venues and a £15 show will outshine one that is £5 or Free? You would think so wouldn’t you? Well maybe we should have a look at how the Fringe really works.

Understanding the Fringe means knowing who actually pays for it. Promoters? Venues? Some all-powerful Fringe body?  All of those will make money but actually the Fringe is mostly paid for by performers (who generally don’t make money!). Really? Yes, Really!

The open-access policy means that anyone can perform at the Fringe so long as you can find a venue. Demand to perform at the commercial venues is high and they have evolved a selection criteria that sets a minimum number of tickets that shows must sell, then charges them for those tickets before the festival even starts. Now it doesn’t really matter for the venues if tickets sell or not as they have already covered all their costs.

Performing at a 100 capacity pay-to-play room will cost an act a minimum of £160 per day or £4,000 for the whole Fringe. Ticket income is then split 60/40 but the venue applies such a myriad of deductions that shows are unlikely to ever cover what they have already shelled out. The venue is the only one guaranteed to make money in this relationship. Also with 10 shows programmed into each performance space it could generate the venue around £1,600 every day, or £40,000 for the whole Fringe. The commercial pay-to-play promoters have 65 performance spaces between them with an average capacity of 150 which means they’re charging performers nearly £4 million to pay for the Fringe, most of whom simply won’t make this money back.

Competition is so fierce for spaces in pay-to-play venues that, unless you have a full marketing campaign, then you are unlikely to get selected. This has led the average cost of putting on a Fringe show to be around £14,000. You can be the best show on the Fringe but if you haven’t got the cash then you are unlikely to be in the Assembly, Pleasance, Underbelly, Gilded Balloon or Just the Tonic. Conversely, if you wave enough money at them then they will probably find you a space somewhere.

So who ends up paying for these imposed costs? You the consumer of course. Just to stand a chance of breaking even, most shows need to charge at least £10. Even when you are paying £15 or £20 for a ticket, it is very unlikely the performer will see anything. It’s all being spent on that same marketing that you aim to ignore all month. It’s a myth that ticket prices reflect what the show is worth: they are dictated by what costs have been imposed on the show by an industry that has gone ever so slightly mad.

Some performers may still want the bragging rights of having played certain pay-to-play venues, but for how much longer? If you were a smart, funny, interesting act and you had a choice between spending thousands and risk not seeing a penny in return… or being part of a fun environment where you will be treated fairly, where would you decide to put on your show?

The Alternative Fringe adopt a model similar to The Stand, who have been promoting some of the best, most affordable shows for years. We do not charge artists guarantees, rent or other hidden fees (Alternative Fringe earns £1 from each ticket sold). If we don’t sell tickets then we don’t get paid, which means we select shows purely on quality. As we are paying for the marketing ourselves, we are careful not to waste our money. These savings get passed on to the punter through cheaper tickets – £5 per show or £12 to see four shows (one pay).

Most importantly Alternative Fringe performers do not have to worry about getting into debt. When you buy a £5 ticket the performer is always seeing a healthy cut so you know that they are happy… It’s ironic that the pay-to-play mainstream comedy has been sponsored by a marketing led commercial beer, whereas the Alternative Fringe has been sponsored by Scottish Borders Brewery who produce individual real beers with care, building their business through word of mouth for a quality product.

“The pay-to-play venues have their commercial festival, but we are making a stand to Reclaim the Fringe!”

ADDENDUM: By the time of the 2013 Fringe, Bob had developed his Pay What You Want concept under the banner of his Heroes of Fringe at two Edinburgh venues Bob’s Bookshop and The Hive.

24 responses to “How the Edinburgh Fringe is financed: the article which you cannot read in this morning’s edition of The Scotsman”