In Vancouver: Godzilla, sex workers, a man in a surgical mask & red umbrellas

The things I do not know about are many and varied, but I am always interested to hear about them.

This blog’s occasional Canadian correspondent Anna Smith reports that the newest Godzilla movie is being filmed in the Vancouver suburb of New Westminster (up-river from Anna’s boat) and in Richmond (famous for the troubling potato thefts which have been mentioned in previous blogs).

Meanwhile, other suburbs of Vancouver (Surrey and Coquitlum) have been facing attacks by wild bears and Anna went on a demonstration last Saturday. 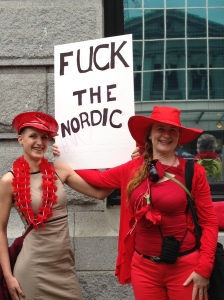 It is called the Bedford v Canada case.

Terri-Jean Bedford wants the Supreme Court to strike down laws that prohibit operating bawdy houses, making money from prostitution and communicating in public to sell sex. An Ontario Superior Court judge struck down all three laws in 2010, concluding that they violated the defendants’ constitutional rights to freedom of expression and security of the person. The Ontario Court of Appeal later upheld the street soliciting law, but agreed with the previous ruling on the laws regarding bawdy houses and living off the avails.

At Saturday’s rally, Anna tells me she wore a red costume and carried a sign which said FUCK THE NORDIC – a  reference to ‘The Nordic Model’ ….a term meaning the current Swedish method of attempting to decrease prostitution which involves criminalising the customers of prostitutes and sending the prostitutes themselves to counselling.

“A lone, middle-aged Norwegian man came up to me,” Anna told me yesterday “and angrily said I’m Nordic and told me he found my sign very offensive. He  stomped away before I could explain the meaning… I shouted after him: I’m Nordic too!”

The rally last Saturday, says Anna, was followed by a march through downtown Vancouver and past the seedy used bookstore area.

“Near Victory Square,” Anna told me, “we were joined by a group of First Nations sex workers who were very happy to take the lead.”

“Our route also took us through the DTES (downtown east side) area, which is Canada’s poorest postal code and infamous for its murders and drug addicts. It’s the area where serial killer Robert Pickton picked up his victims… aka The Missing Women… a case which affected everyone in British Columbia and which was the subject of a recent public inquiry.”

Former pig farmer Pickton was arrested in 2002 and convicted of murdering six sex workers though the remains of dozens were found on his farm and he boasted that he killed fifty prostitutes.

“The red umbrella is the international symbol of the sex worker,” explained Anna.

“A couple of other troubling incidents have occurred in the Vancouver region over the weekend,” said Anna.

“Police are searching for a man dubbed “The Surgical Mask Bandit” who has been robbing banks wearing a surgical mask.”

“And the inhabitants of the large houseboat tied up behind my boat held a large house party on Saturday night. The combined weight of the guests nearly sank the houseboat. The guests bailed valiantly from all available portholes, but in vain. The fire department eventually arrived and, after much struggling with the laws of physics, they were able to stabilize the vessel and pump her to a safer altitude.”

Other people’s lives are a constant source of interest and wonder.