There was a club in Catford called The Witchdoctor. It was a club we all went to although they didn’t sell drink. Downstairs there was ‘Mr Smiths’ – a gambling casino….

Eddie Richardson was involved in a big shooting at Mr Smith’s, underneath The Witchdoctor. It was a inter-gang thing. They all met down the gaming club and this bloke got shot and was bleeding all over the place from an artery. ‘Mad Frankie’ Fraser (the Richardson’s infamous ‘enforcer’) hit a bloke who subsequently died and ‘Mad Frankie’ himself was shot in the thigh. He got outside and the police found him lying in a front garden round the corner in Fordel Road, Catford, where my Aunt Rosemary and Uncle Doug were then living. His mates had just left ‘Mad Frankie’ there. A bit inconsiderate to the neighbours.

No-one outside South East London knew the Richardsons until they were arrested and there was a lot of publicity at their trial about torturing people in a home-made electric chair.

But everyone knew The Krays. As comedian Lee Hurst says, the Blind Beggar must be the biggest pub in the world. Every time you meet a London taxi driver he says he was in the Blind Beggar the day Ronnie Kray shot George Cornell.

Some people say the Krays wouldn’t have been big if there hadn’t been the shooting in the Blind Beggar. But these days people are getting shot all the time. In the paper yesterday there was a bloke shot in a pub in Yorkshire at lunchtime. I suppose The Krays were setting a trend.

The Krays also had that showbiz thing about them. They actually owned a club;  the actress Barbara Windsor was a girlfriend of Charlie Kray and later married Ronnie Knight who worked for The Krays; and the Conservative politician Lord Bob Boothby, whose mistress had been Prime Minister Harold Macmillan’s wife, was having it off with Ronnie, the gay Kray. 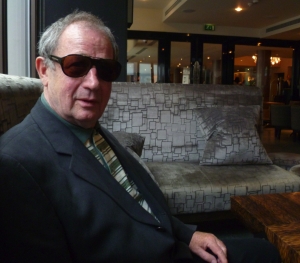 Micky Fawcett in the May Fair Hotel, London, yesterday

Yesterday, I had tea at the May Fair Hotel in London with former Kray Twins associate Micky Fawcett.

His new book Krayzy Days is that rare thing – a totally true insight into what it was like being with the Kray Twins – Ronnie & Reggie –  and their brother Charlie.

“Did the Kray Twins have a sense of humour?” I asked.

“Or maybe black and blue,” I suggested.

“He was an Oscar Wilde type,” mused Micky. “I’m not saying he was witty, but he would have loved Oscar Wilde. The way Oscar Wilde used to carry on.”

“Because he felt he was clever and superior?” I asked.

“Well, Ronnie felt superior,” Micky agreed. “He was called The Colonel. He thought he was superior to everything and everybody. As I say in my book, I was round the Twins’ house one day and somebody dropped in a copy of Private Eye. It was about ‘Knacker of The Yard’ (Private Eye’s name for un-named policemen) and all that – I can’t remember exactly what it was about. But Ronnie read it and laughed for the rest of the day.

“He used to describe himself as ‘a well-known thug and poof’.”

“But,” I said, “he took exception when George Cornell called him a poof.”

“When Ronnie shot him in the Blind Beggar pub,” I added.

The Blind Beggar pub in London

“Well,” said Micky, “in the book I tell the true reason for that. It has nothing to do with homosexuality at all. It’s in the book. I was visiting someone in Dartmoor Prison. But, the day before the Blind Beggar shooting, there was the big tear-up at Mr Smith’s in Catford.”

“That’s the one mentioned in Malcolm Hardee’s autobiography,” I said.

“Yes,” said Micky. “Everybody was Whoa! Did you hear that? Whoa! My God! and all that. Frank Fraser finished up with a bullet in his leg in that front garden. It was a big tear-up between the Richardsons and another local ‘firm’.

“The following evening, I was going to Dartmoor, so I went over to the Regency club to meet the fellah I was going with – the Regency being a club in Hackney frequented by the Krays, who had a small share in it. People think they owned it, but the Barry family owned it.

“When I got to the Regency, I saw Reggie outside and he said: What about the news! Reggie was a very uptight sort of fellah. He never hardly showed his emotions. But he grabbed hold of me and he was waltzing me round on the pavement saying: What about it, Mick? Wasn’t it great? The Richardsons had been arrested.

“But I didn’t feel very elated by it at all. They had never done anything to me and, as I came away, I thought to myself: I’ve a feeling now that the next thing is going to be them (The Krays). Once these things get underway, the police nick everybody. The Richardsons had been arrested, but it wasn’t something to celebrate.

Nine months later, ‘Mad Axeman’ Frank Mitchell was sprung from Dartmoor Prison by the Kray Twins and subsequently murdered on their orders when they found out he really was uncontrollably mad.

“Frank Mitchell would come for a chat at Dartmoor,” explained Micky, “because he didn’t have any visitors of his own. He’d sit down and say to the screw: You look after him, cos he’s a friend of mine and I’m telling you, if you don’t... and the screw would say Alright, Frank, alright. OK, Frank, keep calm... That’s a fact. They were good experiences when I look back.

“Anyway, we come home to London and, early in the morning, I got a newspaper and it said: MAN SHOT DEAD IN THE BLIND BEGGAR PUB. So I get on the phone straight away to Charlie Kray. He says: Meet me outside Mile End station. So I go straight there and I can remember it as if it was yesterday.

George Cornell in a police photo

“I said to him: Reggie? and he said No, Ronnie. I said Yeah? He said Yeah. What’s happened, Mick… you know that turn-out down there…”

(Micky and I agreed that, for the rest of the exact detail of this story, you will have to buy Micky’s book… He’s no fool and I am not going to argue with him. So there is a section of our conversation missing here… Micky then continued…)

“So he’s going to throw a petrol bomb into Freddie Foreman’s pub.

“And Charlie Kray told me I wish you’d been here, Mick, because you’d have been the obvious choice to send over because I would have liaised – I used to – but they sent Nobby and he’s come back and gone Oh, it’s all off again! Murders! We’ve gotta do something! They’re going to burn Fred’s pub down!

“And Ronnie’s gone What? And Ronnie’s got all excited, cos he’s mad and he’s gone Give me a shooter! Right! Right! Let’s have a drive round and see if we… and he’s gone into the Blind Beggar and Boom! and that’s it. Just cos Cornell was one of them, cos he was associated with the Richardsons.

“I got on well with Georgie Cornell. He came from Stepney but was very friendly with the Richardsons in South London. He wasn’t 100% with them all the time. And all kinds of strange stories have gone on about why he was shot.

“The strangest of them all is that Georgie Cornell gave Ronnie a terrible beating on some previous occasion. John Pearson says it in his book. But the fellah who told Pearson is a terrible liar.”

“Don’t worry about him,” Micky told me. “He’d have trouble getting out of his armchair.”

“There are so many stories,” I said to Micky: “The comedian Lee Hurst used to say that the Blind Beggar must be the biggest pub in the world because, every time you met any London taxi driver, he would claim he was in there the night Ronnie Kray shot George Cornell.”

“Well,” Micky told me, “in the pub that night there really was this fellah called George The Fib.”

“Is he violent, is he still alive and does he live near me?” I asked.

“You’re OK,” said Micky, “he’s dead. But he was called George The Fib cos he was known for lying about everything so, when he told people he had been in the Blind Beggar the night of the shooting, no-one would believe him. He was going around afterwards saying What about that turn-out? I was in there that night… but no-one would believe him. The Old Bill didn’t even interview him.”