Martin Soan, who runs the Pull The Other One comedy club in London (and soon Leipzig) with his wife Vivienne, recently told me that he thought most of the truly original new bizarre comedy acts around – but often not booked into traditional comedy clubs – were women.

Last night was a prime example of the talent out there. 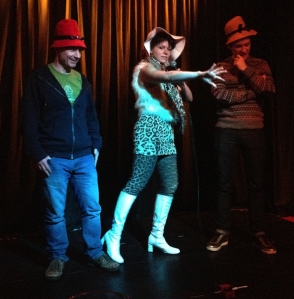 Extraordinary, mind-dazzling charisma does not even begin to get close to the stage presence which Canadian comic, actress, clown and puppeteer Nelly has and Zuma Puma is only one of her comedy characters.

She last appeared in this blog at the Edinburgh Fringe, cavorting naked with a giant gold-painted almond in Almond Roca: The Lost Cabaret and singing sweetly (with terrifying homicidal outbursts) as the frighteningly schizophrenic Nancy Sanazi on the Malcolm Hardee Comedy Awards Show and in Frank Sanazi’s Das Vegas Night II.

Last time I saw her, Candy Gigi was at Pull The Other One, yelling at the audience, her mouth erupting with half-eaten Corn Flakes, scrawling red lipstick all over her face and clearly ready to be dragged kicking and screaming to some Bedlam-like Victorian insane asylum. 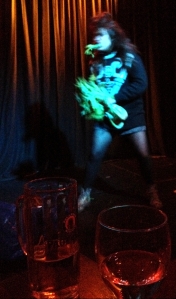 Last night, at The Lost Cabaret, she seemed to have turned the volume up even louder, was screaming at the audience with a tsunami-like intensity and was manhandling – as a surrogate baby – green vegetative matter which she ended up literally shoving into audience members’ faces. And let us not even mention the shouted OTT and utterly unrepeatable obscene poetry.

I tried to take a photograph of her for this blog. It was like trying to photograph a tornado… It comes out fuzzy and can be dangerous.

The evening ended with the entire audience holding each other in a circle.

The Lost Cabaret is not so much a normal comedy show, more a 1960s ‘event’ with a large juicy pizza of ten (or was it eleven?) new 2013 comedy performers.