Yesterday, I went to church to see (again) Juliette Burton’s wonderfully enjoyable and emotional show When I Grow Up. Yet again life-enhancing. Yet again funny, fast-moving, uplifting and joyous and – yet again – the body punch of the coup de théâtre sting-in-its tail had me with tears in my eyes. I was watching the audience reaction and their emotions turned on a sixpence from laughter to stunned shock when the narrative carpet was pulled from under them and (far more difficult for a performer to pull off) back to laughter again. 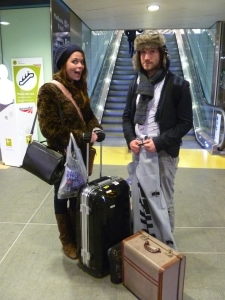 When I Grow Up is also a technically very complicated show with constant audio and video cues to hit, fast-moving PowerPoint presentation changes and, at one point, Juliette interacting with a Skype screen. Yesterday, the techie on the show was Frankie Lowe, who composed Juliette’s pop song Dreamers (When I Grow Up). The show was flawless and was, in effect, a rehearsal for next month’s two-night run at the Leicester Square Theatre which is, itself, a dry run for Juliette’s Australian shows in February-May, which Frankie will also be teching.

Almost as interesting as the show, though, was the location – a church.

The vicar – Dave – arrived close to showtime because he had been conducting the funeral service for Great Train Robber Ronnie Biggs at Golders Green Crematorium, where the eco-friendly wicker coffin had, the Guardian reports today, been draped in the flags of the UK & Brazil and an Arsenal football scarf. The coffin was escorted by Hell’s Angels with the London Dixieland Jazz Band playing Just a Closer Walk and it left to the strains of The Stripper. The Daily Mirror today reported that “as the hearse carrying his coffin passed through the streets of north London, a white floral wreath in the shape of a two-fingered salute was visible.”

He is clearly an interesting vicar. He has published several books including How To Be a Bad Christian.

That book’s blurb explains Dave lays down “some key practices for how to be a ‘bad’ Christian, including how to talk to God without worrying about prayer, how to read the Bible without turning off your brain, and how to think with your soul rather than trying to follow rules.”

This August, he will be publishing How To Reinvent God (and Other Modest Proposals).

Everyone seems to be publishing books at the moment, except me. 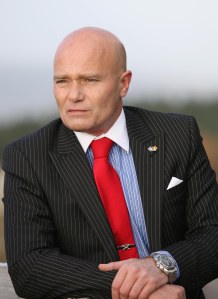 Last November, I had a chat with Glasgow gangland ‘enforcer’ William Lobban about his autobiography The Glasgow Curse. This morning, he told me it had gone straight to No 4 in Amazon Kindle’s True Crime bestsellers and No 3 in Waterstone’s crime bestsellers.

Yesterday, STV reported that “former Glasgow gangster” Paul Ferris , who has written his own true crime autobiography, “is considering taking legal action” against William Lobban’s publisher over what is written in the book. STV did not say what the problem was, but it somehow involves the highly-publicised shooting of Glasgow Godfather Arthur Thompson’s son ‘Fat Boy’ outside their family home ‘The Ponderosa’ in 1991.

The Wee Man – a fascinating film based on Paul Ferris’ version of his exploits – was released last year.

This morning, I asked William Lobban for his reaction to the report that Paul Ferris is “considering taking legal action”. He told me: “Ferris has been sending me (@TheGlasgowCurse) naughty tweets. Check out his Twitter feed (@PaulFerris_Gla) and see for yourself… quite malicious!… It’s all wind. He’s basically letting off steam and there’s no way he will take things further. There isn’t a judge in the land who would agree that anyone could blacken or defame his character – Impossible!”

The move from villain to media anti-hero or even sometimes hero is interesting.

Great Train Robber Ronnie Biggs, like Buster Edwards before him, had mostly achieved the move from criminal to perceived cheeky chappie.

The Great Train Robbery happened in 1963. 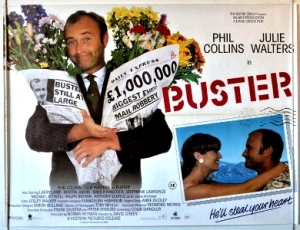 In their time (if they ever existed) Robin Hood and Dick Turpin were criminal robbers. Now Robin is a hero and Dick a hero, anti-hero or whatever you want to make of him.

They, like others after them, have moved from being reviled criminals to legends.

The Kray Twins’ exploits were in the 1960s. By the time The Krays movie was released in 1990, they were already well-established as legendary cultural anti-heroes (or, to some, heroes).

In movies, dark heroes are always more interesting to act and to watch than whiter-than-white heroes.

The interlinking of showbiz, the media and crime. The making of legends.