Dying from cancer in the 21st century

I used to keep an electronic diary.

Two days before, he had had a cancer operation.

To set the scene, this first extract from my diary is on…

My father & me (aged 1) near home in Campbeltown, Scotland

I stopped in at the hospital to see my father. He had colour in his cheeks, though his hands and lower arms were a bit yellow (possibly because of the tubes and injections he had had in them). He was looking much more awake and bright-eyed than I had thought he would be and his mind was OK, though he had various tubes in his arms, a see-through oxygen mask over his nose and mouth, a grey plastic bulldog clip on one finger (which I think is for blood pressure readings) and he said he felt “exhausted”.

He told me he had slept off-and-on last night. This morning, he was OK but this afternoon he was feeling (and was) sick and had pain in his lower stomach. He said it was odd because, with an oxygen mask on, he was sick along tubes. There were, he said three or four people (he seemed to say doctors) looking after him in the afternoon, giving him painkillers, anti-vomit injections and, he said, two bags of blood because he had a low blood count.

This morning, the surgeon/consultant had come to check on him. The surgeon/consultant said the tumour he removed had been much, much bigger than he had thought it was going to be and – being so big – it had affected either the liver or the kidney (my father was unsure). My father seemed to say the large tumour had rubbed against whichever internal organ it was, though I was not clear if the liver or kidney had been ‘affected’ by the rubbing or if it was a spread of the cancer itself. The surgeon asked my father to tell me he wanted to see me and my mother, if possible, at 10.00am tomorrow morning (on his normal rounds), so he could tell us what he had told my father.

“He said I would need more medical treatment,” my father told me.

“No,” insisted my father. “He made sure he emphasised it was medical treatment… though I don’t know what that means.”

Just before I left, my father took his lower, then his upper teeth out and a nurse put the two sets in a glass of water. He was already without his spectacles and his hearing aid. I left him sans teeth, sans eyes, sans everything.

At my parents’ home, I asked my mother if she had slept last night. She said she kept waking up. “I’d be asleep,” she told me, “And I’d stretch my leg across the bed and it wouldn’t touch his leg because he wasn’t lying there next to me.”

My parents when they were in their twenties in the 1940s

My mother and I went in to see my father in hospital this morning and I managed by accident to bump into the consultant on the stairs, without my mother, so I had a chat with him.

The tumour was, as my father had told me, much bigger than the consultant had expected and had affected the pancreas and part of the liver. He had decided not to remove the extra bit but to leave it in because really, he said, it was safer than just chopping away at things. He told me he is not going to operate on it and says the liver is a relatively large thing and there is a small area affected at the moment.

After my father gets out, he has an appointment to see the consultant on Wednesday 16th May – that will be a good week, as my mother is seeing HER Consultant on Monday 14th. My father’s meeting is to decide what to do about what is left. Whether or not to do chemotherapy. The consultant told me he is inclined not to do chemo as, “frankly, sometimes it has an effect and sometimes it has no effect at all” and, in this case, it would probably not make any difference.

So, basically, my father will not be cured of the existing problem. I asked the consultant specifically about life expectancy and he replied – commendably honestly I thought – “We really have no idea how long things like this will take”. He meant doctors are really just plucking a random figure from the sky if they do a guestimate.

His guestimate for a worse-case scenario was that – if the disease suddenly vastly accelerated which he does not think it will – death would be “in a few months”.

I asked what the longest guess might be: “Five or six years?”

But, as he says, it is really just plucking figures from the ether.

I said I was amazed that my father had never been in any pain at all with the cancer itself (he now has post-operative pain) and asked if things would deteriorate into extreme pain. The consultant’s reply was (I paraphrase):

“Again, one can’t tell. It might or might not happen but there is no particular reason why it should suddenly change its nature.”

I did not quite know what to tell my mother about this, so told her the consultant is happy with my father’s recovery, but that a part of the liver has been infected – I did not mention the pancreas – and that the meeting on 16th May is to talk about possible treatment including chemotherapy.

At 10.00am, the consultant told her the tumour was much bigger than expected and that he had found “a secondary” in the liver.

Basically, she knows what the consultant told me except for my specific question about life expectancy. 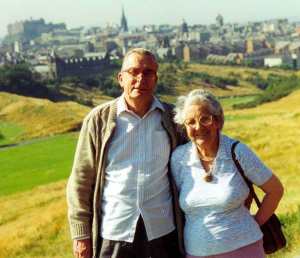 My parents in Edinburgh, perhaps in the 1970s. Sometime.

2 responses to “Dying from cancer in the 21st century”