The Kunt (and The Gang) Monologues

When Kunt and The Gang announced earlier this year that he was retiring, I immediately booked him to climax the Increasingly Prestigious Malcolm Hardee Comedy Awards Show at the Edinburgh Fringe last month with his song Paper Boy. That version is not on YouTube, but this one is…

I thought it would also be interesting to chat to him for a blog, but he told me: “I stopped doing face to face stuff as it never comes across in print quite as well as the email interviews.”

I told him: “I’m never very keen on written Q&A ‘interviews’ because they never sound like a lively conversation. Writing in grammatical perfection is always a killer.”

So, inevitably, we did do a Q&A email interview. This is it.

Q – Why are you giving up? Have you run out of original ideas? Have you gone mentally dull? Do you now want to smoke a pipe, suck Werther’s Original sweets and hug people rather than offend them?

Kunt had new inspiration suddenly pumped into him in 2011

A – I ran out of ideas in 2011 but, luckily for me, Operation Yewtree came along and helped me drag it out for another five years. I’ve been thinking of packing it in for a few years, but my mind was made up because of how many maverick celebrities have croaked this year – Bowie, Prince, Victoria Wood, Caroline Aherne etc. etc. If they keep dropping at this rate, it’s only a matter of time before my minor internet celebrity status gets bumped up and then I’m on the ‘at risk’ register.

Q – Are you so stinking rich now that you don’t need to work and just want to watch Countdown on TV?

A – Yes, because playing 50 gigs a year for 6 quid a ticket can make you a millionaire. Are you having a fucking laugh? Don’t worry. I’m still driving round in a Ford Fiesta and looking for the yellow ‘whoops’ stickers in Asda.

Q – Did you get to keep your 2011 Malcolm Hardee Cunning Stunt Award or did Bob Slayer nick it?

A – I gave it away in a competition. A bloke from Colchester won it. They’re not worth loads of money, are they?

Q – They’re increasingly prestigious. Is your retirement just a scam? Everyone thinks it might be. Are you going to keep doing ‘return’ gigs like Frank Sinatra?

A – I’m not quite sure why everyone thinks it’s a big scam. I think people are just in the denial stage of grief. I had four people at my gig in Bristol last week tell me that I should call my comeback tour ‘The Cum-back Tour’. With my current Christ complex, I’m favouring ‘The Res-erection’. 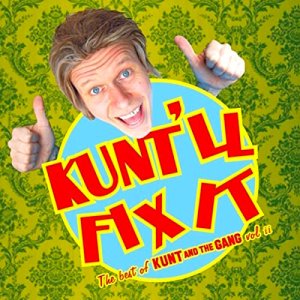 Now then, now then, boys and girls. What will he do next?

Q – Are you likely to reappear as a different character? Like Avid Merrion in Bo’ Selecta became Keith Lemon?

Q – How did you think up the Kunt character and, indeed, why?

They’re really just a couple of cunts so why can’t I just be a kunt?

Q – What were you before you were a Kunt?

A – I worked part-time for the local council doing odd jobs for the Youth Service. Whenever I tell anyone that I suddenly see them thinking: Historical sex crimes.

A – It was a few years ago but, as I remember, I was just sent to the youth centres in the daytime when there were no teenagers around to do minor maintenance tasks like collecting the money out of pool tables and sniffing the toilet seats.

A – A one-and-half turd visit on the 15th December 2013, which I tweeted a picture of to Simon Cowell as part of the world’s first ever virtual dirty protest.

A – Drunkenly trying to get big Karen to finish me off in a toilet cubicle in the multi story car park next to Club Art in Southend while my mates jumped up pulling faces over the door.

A – I couldn’t imagine being 21 when I was 17, let alone 34. I’ve always thought if you think about things too hard you’ll talk yourself out of it.

Q – So, in the past, this philosophy of life has resulted in you doing what?

A – All this. And kicking the odd pensioner’s wall in.

Q – Has writing wall-to-wall filth worn your spirit down? Are you going to write non-filth now?

A – I don’t think of it as wall-to-wall filth. I think I’m just dealing with the difficult subjects that no one else wants to sing about. Because of that, I think I‘ve been lucky to have a whole new raft of rhyming couplets that no other fucker wanted – like ‘come uppance’ and ‘lady’s tuppence’. That said, I always had a secret ambition to do Eurovision but I’m worried I might be overqualified.

Q – So will you write ‘clean’ song lyrics in future? Your songs are so technically good, you could make it in the ‘straight’ music biz. You could do The Voice or a Simon Cowell TV show or, yes indeed, Eurovision.

Q – Have you made useful contacts in the ‘straight’ music biz?

Q – Your final show is in London on November 5th. Seven days later, what will you be doing where, why and with whom?

A – Sitting on the sofa on my own, in my pants, watching Police Academy 7 on DVD.

Q – Describe your house. Where is it? – In a city? In the countryside? In suburbia? What is it like inside?

A – Is this fucking Hello magazine? I’ve got a square-ish house with a pointy roof on the upskirts of a town. It is the town where Depeche Mode are from and also Brian Belo from Big Brother. Inside there’s some rooms containing the usual furniture and in one room a bed along with piles of old posters and boxes of unsold CDs and T-shirts. (Note: Depeche Mode and Brian Belo came from Basildon.)

Shannon Matthews The Musical: a great loss to the West End

A – I’m gutted my Shannon Matthews musical didn’t make it onto the big stage. I always secretly believed Lloyd Webber would discover it and make us an offer. But he didn’t, the rubber-faced old posho.

A – Shannon Matthews was the 9-year-old daughter of ginger munter Karen Matthews, who unsuccessfully masterminded her fake kidnapping to try and cash in on the back of the Madeleine McCann bandwagon.

Shannon Matthews: The Musical is a full-length audio musical I wrote based on the case and then recorded with some mates from Huddersfield. It is my proudest moment, but sadly never got produced on the big stage. Fucksticks.

Q – What is going to happen now when you have all these great creative ideas and you have nowhere to use them? You will get creatively constipated, won’t you?

A – I haven’t really thought about what I’ll do for an outlet but, put it this way, I wouldn’t want to be my paperboy. I have been regularly frustrated on this tour stuck in fucking traffic. Currently it’s averaging out 8 hours in the car for every hour on stage. It’s doing my biscuit in.

Q – Are there Kunt groupies when you are on tour?

A – Sadly, they are mostly sweaty mental balding men in their mid to late 40s. I meet loads of really smashing people but, in the last few years, I seem to have become like a flypaper for nutjobs.

Kunt on tour with Mike Gibbons, whom he calls “my former manager, minor internet hit wannabe and dangerous loner”

Q – Why do you think that has suddenly happened?

A – I think it’s just the law of averages. You meet thousands of people, so odds on there’s going to be a few fruit loops. They always seem to be more persistent and intense, though, giving the impression that there’s more of them than there actually are.

Q – Have you any baby Kunts at home or are you planning any?

A – I’m in my early 30s now so I guess at some point soon I might have to start thinking about that.

A – Not a Mrs Kunt, but a long-suffering Miss Kunt. It’s been hard over the years to keep a relationship going whilst doing as many gigs as I have but these days you can just have a wank into FaceTime.

Q – So how are you going to financially support yourself, Miss Kunt and your potential mini-Kunts?

A – I don’t live a lavish celebrity lifestyle. I don’t dine at the Ivy. I dine at Harvester where you get unlimited salad with your main meal. At the end of this tour, I’ll have a dwindling pot of cash that gives me 9 months to work out what the fuck I’m doing next and make a go of it. Having failed at everything I’ve ever done apart from this it’s very likely there’s going to be a much anticipated ‘Cum-back’ tour…

Q  Any regret yet that you have announced your retirement?

A – Of course. I fucking love doing this. I love the gigs, meeting people and hearing about the time they soiled themselves and where they stashed their underwear after. But the time still feels right to knock it on the head, while I’m still enjoying it rather than waiting for it to all turn to shite.