In New Orleans, a 76-year-old mixture of James Brown, Ray Charles and Elvis 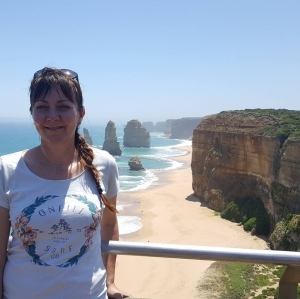 Samantha, in this shot, clearly not in New Orleans…

My chum from Lancashire, Samantha Hulme, is currently in New Orleans.

She has been staying with a friend who lives there.

She met him on a previous visit.

She sent me a video of him singing in his living room.

In a second message to me, she wrote:

I love it here.

I love to travel

When I found New Orleans and knew I wanted to make a life here.

Whenever I travel I don’t want to be a stereotypical tourist. I want to be safe, but I want to see the real country, the culture, the real people. I was lucky enough to get the offer of accommodation from Mr James Winfield – stage name The Sleeping Giant.

It was an act of kindness stereotypical of this city. In his own words, he never wants another woman again. He was just genuinely trying to help me.

I feel incredibly lucky to have been able to learn so much about music with a man who was recording records in the 1960s before I was even born. I have had the true New Orleans experience.

I couldn’t have done it better. I have laughed so much I cried with laughter on various occasions – the man’s absolute bluntness, his wry sense of humour, alongside his total inability to understand what I am saying in my northern accent most of the time, will be an experience which will keep me laughing for the next year.

It was like s mixture of living with James Brown, Ray Charles and Elvis – His voice has characteristics off all of them at times.

I am a physical & movement therapist and I can’t believe the stark difference in how we age in the UK compared to here.

He works full-time as a panel beater and sprays cars. He sings a few nights a week and he goes out there blazing in all his stereotypical New Orleans fancy suits, bright shoes and I have never known a man with so many hats. He appears to have boundless energy.

I know no-one in the UK like this even a decade younger than him.

Then I look at quite a few of the great musicians and singers here in New Orleans living into their 90s and I can see why.

The video clip I sent you before of James singing in his house was a wonderful spontaneous moment of seeing my new friend jamming with his grandson and what I really saw was his huge love of music that afternoon. When the man talks he sounds like his singing.

But I don’t think it fair to show him only singing to a piece of bread in the afternoon.

So here is a video of him singing at a club as well.