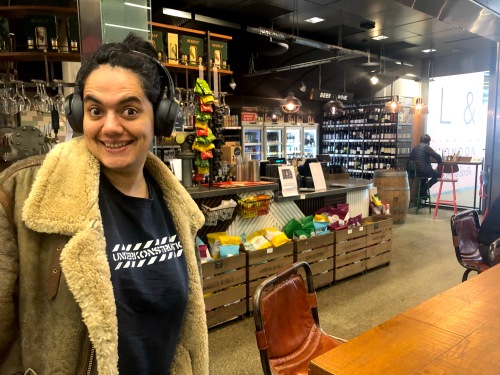 JOHN: You told me you had recently come back from Morocco after an anti-holiday. What’s that?

BECKY: It’s based on an urban myth. There was a taxi driver from Notting Hill who was unhappy with his life driving a taxi, so he went on an anti-holiday. He went to Doncaster to work in a pig factory, wanking-off pigs for two weeks. And, when he came back, he absolutely loved working as a taxi driver. That’s the concept.

JOHN: You went to Morocco to wank-off pigs?

BECKY: No. I went on holiday with my friend…

BECKY: Yes. I went to eat some nice Moroccan street food and pet some cats, because there are a lot of cats in Rabat. 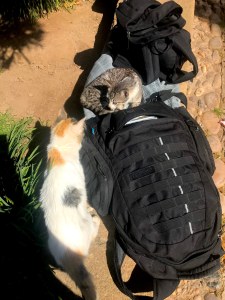 JOHN: Is that a song? A Lot of Cats of Rabat?

BECKY: No, but the street cats of Rabat are plentiful because they killed all the dogs off.

JOHN: The cats did?

BECKY: No, the locals. They had a cull because they were trying to posh the place up; they couldn’t have crapping, rabid dogs running around the streets. And, now they’ve killed the dogs, it’s full of cats. Even if you go into a cafe, you have to clear the cats off your seats.

JOHN: So you had a stroke in Rabat.

BECKY: Several. But about a year ago I went to meet my friend’s new boyfriend. She wanted me to tell her he was absolutely amazing and that he was not involved in a romance scam. He was a Moroccan man she met on the internet and I thought: She’s attractive; she’s young; she’s got loads of money; surely this can’t be a romance scam? But that’s exactly what it was. Though I suppose all those things are a traditional element of real relationships anyway.

JOHN: Not in Doncaster…

BECKY: I’m sure they are in Doncaster…

JOHN: Anyway… About a year ago, you went out to Rabat with her and met her boyfriend.

BECKY: Yes. The guy was nice enough, but I spotted from the beginning that this wasn’t a traditional romance. What she’d got me there for was to tell her that, actually, it was great. But I was observing that maybe the relationship wasn’t quite as she had explained it to me.

When you’re closely involved with another person in a relationship, often it’s just that external eye that begins to show up the cracks and imperfections in the relationship.

JOHN: So you were dubious and told her…

BECKY: But she was obviously in love and didn’t want to hear that. So we went surfing.

BECKY: He was a ‘surfing instructor’. I’m not that strong a swimmer and I had never surfed before in my life. I was on the surfboard and he said: “We’re just gonna go for a little ride,” so he jumped on the back and then suddenly I was in a riptide, which is a tide surfers use to pull themselves out to sea so they know where they are…

So I was in this riptide I had been told to avoid by my friend and I was being dragged out to sea and now the ‘surf instructor’ was nowhere to be seen.

Basically, I managed to save my own life, got back to the beach and then my friend had a go at me. She said I had put her boyfriend in danger by going into the riptide.

About two days later, I woke up and realised it wasn’t me that had put myself into the riptide: it was the surf instructor who had been on the back of he surfboard. He had put me into the riptide…

Now, I don’t know if that was just to ‘teach me a lesson’ for my meddling or just to try and get rid of me cos I was interfering with his nefarious scheme… I have no idea.

Anyway, I spoke to my friend about it when we got back to Britain but she – obviously in love with him – didn’t want to hear it at all. So I didn’t hear from her for about six months after that: not after telling her that her boyfriend had maybe tried to murder me.

In those six months, she went back to Morocco three or four times, married him and he stole her money.

JOHN: How did he manage that?

BECKY: He was very charming and she was in love with him. She put it into his bank account so he could get a visa to leave the country and come with her on her globe-trotting adventures.

The only reason she married him was she wanted him to come surfing with her in Portugal and that was the only way she could get him out of Morocco.

JOHN: He could have surfed out…?

BECKY: No. People have tried that to get from Calais to the UK. It doesn’t work.

JOHN: So he took her money and did a runner. What did she do at this point?

BECKY: She and I made friends again and she asked me if I wanted to go back to Morocco with her. 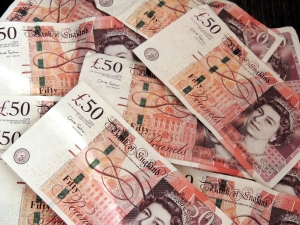 “So he took her money and did a runner. What did she do?”

BECKY: She wanted to go to the police station. I said I would go along with her because I wanted to see the conclusion of the story.

JOHN: Difficult to prove if she put the money into his bank account of her own volition…

BECKY: Yeah, but she had ‘lent’ it to him and this was all detailed in the text messages she had kept.

He had told my friend, who is an acupuncturist…

JOHN: Then maybe she should have been wiser about little pricks…

BECKY: She’s an expert now… He had basically told her: “Don’t come to Morocco because you are an acupuncturist and Moroccans are very religious and, if you go to the police, they will arrest you for witchcraft and cut off your hands.”

JOHN: So you went to Morocco anyway and went into the police station and…

BECKY: They were lovely. They did get out a knife… and we thought Are they going to cut off our hands?… But it was just to cut some fruit to give us while we were sitting there gossiping about this man.

They were absolutely the nicest police I have ever dealt with. In the UK, the police are quite judgmental and conservative. In Morocco, it’s the complete opposite. People who are rebels join the police because they’re secular. They are not religious.

If you are a sort-of rebellious character who doesn’t like the over-arcing hierarchy of Morocco, you join the police – because then you get to have some autonomy as citizens.

The police lady was absolutely lovely. She wasn’t wearing a hijab. Her hair was dyed, she had flowing locks and she loved us cos we were Western and she was very excited to talk to us. She shared stories with us about her awful Moroccan boyfriends and showed us pictures of them on her phone.

The police station is not a normal tourist destination but it is absolutely one I would recommend if you want to find out what Morocco is really like.

JOHN: Did they go out and find the surfing boyfriend?

BECKY: No. But it became very exciting at that point. My friend arranged a double-cross. She messaged him and said she was in Morocco and they arranged to meet the next day.

She told the police and we flew out the night before and he was met by a policeman at the rendezvous.

JOHN: And the outcome was… 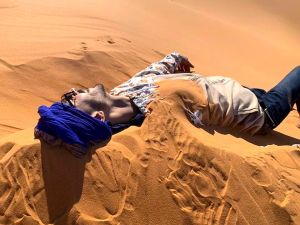 A prime example of lying seductively in the Saharan sand…

BECKY: It’s going to go to court. But my friend is not very interested in dealing with the court, because she’s unlikely to get her money back. I don’t think he has the money any more; I have seen pictures of him on his Facebook page, driving round the Sahara in a jeep and lying in the sand seductively.

JOHN: So what is she going to do?

BECKY: She has made a website to warn other women. It has pictures of him and his name.

JOHN: She will divorce him?

BECKY: I don’t think she will. That way, he can’t marry anyone else.

BECKY: It is, but I think it’s very uncommon. very uncommon. There are financial restrictions and a husband must have written permission from his current wife before marrying a second wife.

JOHN: Is he still a surf instructor?

BECKY: Allegedly, but that’s actually how a lot of con artists pick up Western women.

JOHN: So, do you think if I go down to Bournemouth seafront and say I’m a surf instructor, I could pull a few aged widows?

BECKY: Yeah. Go on. What have you got to lose?

BECKY: You have none.

JOHN: I am becoming strangely attracted to Doncaster as a holiday destination… 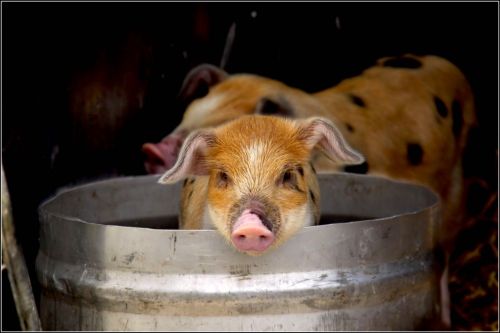 (Photograph by Ben Salter, via Wikipedia)