Tag Archives: Day of the Dead

It was Malcolm Hardee Award winning comedian Becky Fury’s birthday yesterday. I had a celebratory drink with her.

I had tea. She had coffee.

Next month, she is going to lead a Jack The Ripper Comedy Tour around London’s East End. 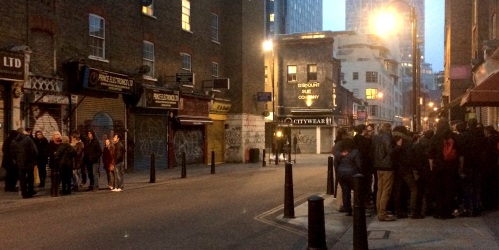 JOHN: So… It’s in bad taste, some might say.

BECKY: Of course it is in very bad taste.

JOHN: No it’s not. You’re doing it on the 2nd of November.

BECKY: Well, it’s the Day of the Dead.

BECKY: Yes. November 2nd – That’s the Day of The Dead.

JOHN: Anyway, why do it?

BECKY: You never hear them complain. But, more generally, serial killers are very popular with the public and I did one on Hallowe’en the year before last. which was very popular. It sold out completely. I think I need more coffee.

JOHN: How many people do you have on a street tour like this?

BECKY: Thirty people; that’s the maximum. More than that and it’s too difficult to shout at them.

JOHN: You have done previous Jack The Ripper tours.

BECKY: Yes, I did a straight one. Then I did a feminist one. And now I’m doing a comedy one.

JOHN: So how are you going to get laughs out of it? There’s a lot of disembowelling involved in Jack The Ripper.

BECKY: Well, there is, but I will just wander round pointing out stupid fake stuff and throw in some real facts and do a quiz about serial killers.

JOHN: So some real facts intermingled with some made-up facts.

BECKY: Yes. Just like in most good stand-up comedy. People tend not to know where reality ends and bullshit begins. As long as it’s entertaining: I think that’s the most important thing. If we walk down Brick Lane, we can find out where Jack The Ripper’s favourite curry house was.

JOHN: Gullible American tourists may take it all at face value.

Becky outside the Jack The Clipper barber shop

BECKY: That’s fine. I am going to take people to random places like the Jack The Clipper hair barbering salon. And there’s one alleyway that’s covered in street art. It’s an actual original Victorian alleyway – one of the only ones that’s left – though, unfortunately, no-one got murdered there.

BECKY: Yes, but it’s atmospheric. We might add art to it. There’s some interesting serial-killer-esque graffiti there already.

JOHN: Is there a prize for the serial killer quiz?

JOHN: You could give the winner a liver wrapped up in paper.

BECKY: No. Though the prize could be not having your liver and internal organs cut out and strewn all over the audience.

JOHN: How much does it cost to buy a real liver from a butcher’s?

BECKY: Alright, the prize could be one of Mary Jane Kelly’s severed ear lobes.

JOHN: Or maybe the family kept John Paul Getty III’s ear… They might donate it. No serial killer connection, though.

JOHN: Have some more coffee. What sort of questions will be in the quiz?

BECKY: Gilles de Rais fought alongside Joan of  Arc in the Hundred Years War, but who did he have his servants lure into his castle, where he would torture, sexually assault and kill them?… I think the team deliberation on that will be interesting. There’s a music round as well.

JOHN: Is this Jack The Ripper Comedy Tour going to be a regular thing?

BECKY: Hopefully. We’ll see how this one goes. Hallowe’en is a good time to get people to come along.

JOHN: The Day of the Dead.

BECKY: The Day of the Dead.

JOHN: Are you going to dress up?

BECKY: I think I might dress up as Fenella Fielding.

JOHN: Where can your comedy go after this triumph? You will have peaked with your Jack The Ripper Comedy Tour. What plans?

BECKY: Tons of stuff, but I don’t want to talk about them yet.

BECKY: Did you put something in my coffee?