Chinese cupping, some Australian wet comedy, a doctor and a baby on stage 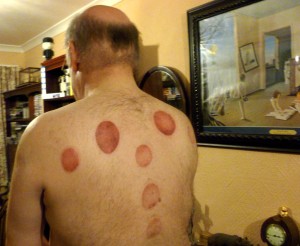 Should I turn my back on Chinese medicine after this result?

I was hit by a truck in 1991. It pulverised two parts of my shoulder which still occasionally hurts; I also hit the back of my head on the edge of a brick wall and have not been able to read books since and the base of my spine is slightly damaged, causing me occasional pain.

The bottom of my spine is painful as I write this.

In my apparently never-ending quest to try and stop this occasional pain, a friend and I tried a cut-price offer from the Daily Telegraph this week – three Chinese techniques, one of which was cupping.

Certainly interesting. But, three days later, we still have giant red-and-brown blotches on our backs. My friend likes to swim but can’t go to the pool with these blotches – “I will look like a mobile art installation!” she says.

I tried to cheer her up by suggesting she could sell herself to Tate Modern, but this only made things worse. One problem, I think, is that she believes the blotches on her back look “very Sixties”. There is nothing worse than being scarred in an outdated style.

But our mild medical traumas are minor compared to British comedian Eric’s financial problems at the Adelaide Fringe in Australia, where he had his credit card stopped after a company tried to take over $4,000 from it for a hotel bill which should have been $640. Being on the other side of the world with his wife Helen and newish-born baby ‘Little E’  but without access to credit, he is struggling a bit.

And it never rains but it pours.

Eric, Helen and ‘Little E’ were eating a pizza under a tree when a leaf fell off the tree onto the pizza, signalling, Eric presumed, the arrival of autumn.

It appears the change of seasons are very marked here. I wasn’t able to finish my pizza as I had to go see Gordon Southern’s show A History of History. As I walked away, the sky darkened quickly and I heard a clap of thunder, followed by the inevitable lightning. “Crikey,” I thought. “It was 31 degrees when we went to the restaurant!”

Then it started to rain. I was wearing only shorts and a shirt – I have not worn a coat or carried an umbrella since I got here in October. The trees on my side of the road provided some cover, but spotting an awning outside a pub over the road I made a dash for it. This was a big mistake. I got as far as the median strip and it absolutely fell down and, as the traffic slowed dramatically at the onset of the downpour, the gap I had anticipated in the cars closed up and I was stranded in the middle of the road with no cover whatsoever… And this was no light shower – it was bucketing it down! Within seconds, the rainwater overwhelmed the drainage system (which is probably only designed to cope with about four inches of rain a year) and great puddles formed by the kerb.

By the time I reached the awning, I was already soaked to the skin and the shelter it offered was of no use to me now. I continued in the pouring rain to see Gordon’s show. I arrived but had missed the start – he was already up to the Greeks (not the financial bail-out, but Aristotle). I sat on a stool at the back of the room and wrung my socks out into an empty glass on the windowsill.

When I had finished, I did not know whether my glass was half full or half empty (of sock juice).

Eric started his comedy career when the late Malcolm Hardee dragged him out of the audience and up on stage at Up The Creek and, ever afterwards, encouraged him to become a performer. It seems Eric’s baby daughter ‘Little E’ may follow in his footsteps (when she learns to walk):

Helen and I have been taking ‘Little E’ to shows at the Adelaide Fringe and she has seen quite a few now, though we suspect that some of the more subtle stuff has gone over her head and a lot of her dinner has certainly gone over Helen. Nevertheless she seems to be having fun.

We went to see the legendary (almost wordless) Dr Brown’s show. I first saw him at the Edinburgh Fringe and he ejected me from his audience, because my mate Charlie Saffrey clapped in the wrong place and Dr Brown thought it was me.

‘Little E’ was silent all the way through his show and, when it came to the part where Dr Brown was miming a baby onstage, I whispered to Helen that, for once, the little one’s cries might actually have fitted in with the proceedings, instead of proving a distraction.

No sooner had the words left my mouth, than Dr Brown left the stage as part of his continued mime and, when he got to the back of the room, he spotted our silent ‘Little E’ perched on Helen’s lap. So he whisked her onto the stage to the delight of the whole audience and ‘Little E’ made her stage debut at 11 weeks and 12 hours old.

Afterwards, Dr Brown said that “it was an honour to be working with such a professional.” Well, actually he said “playing with” but I felt I should change the wording.

My first stage performance was as a result of being dragged up onstage by one comedy legend. Now Erica has followed in her father’s footsteps, but at a much younger age.