Richard Herring’s career and credits are a bit like Irish or Balkan politics or his hair – you could go mad trying to disentangle it. Go read Wikipedia.

But, between 1992 and 2000, he first became famous (or arguably for a second time, if you count radio) as a double act with Stewart Lee for their TV series Fist of Fun and This Morning With Richard Not Judy.

He has been writing his weekly Metro newspaper column for two years – he wrote his 100th last Friday. And he has written his daily blog Warming Up for 11 years. He recorded The Collings and Herrin Podcast 2008-2011 with Andrew Collins and has been podcasting solo since then.

Next week, he records the second episode of his self-financed online TV series Richard Herring’s Meaning of Life at the Leicester Square Theatre.

Last June, he wrote in a Daily Telegraph article that he thought the world was “approaching a revolution in entertainment similar to the one a century ago that led to the explosion in film-making… We are our own media moguls, and as such are denting the power and influence of those who have traditionally held the reins.”

He says: “I am increasingly excited about the artistic possibilities of the internet”.

“After Time Gentlemen Please, I had a bit of time,” he told me last week at Bar Italia in London.. “So I thought if I wrote a blog – Warming Up – every morning it would get my brain working, then I would do the proper work I was meant to be doing.

“I wasn’t doing stand-up at the time. I’d done a couple of one-man shows. I wasn’t looking to create stand-up material from the blog. But, when I started doing stand-up again in about 2004 I found, having written something every day, you could look through it and there might be a routine in it you would never have thought of doing if you hadn’t already written the stuff. 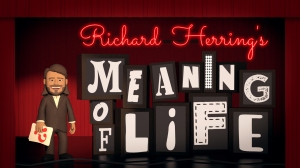 “Even now, when I’m writing Meaning of Life, I can type PARANORMAL or GHOSTS into the search engine and 20 or 30 blog entries will come up. So quite a lot of things in the second episode come from my blog of 5 or 6 or 10 years ago: it’s a great resource. There’s so many things in there I can’t remember writing which might make good routines. I’ve just passed the 4,000th entry and I’ve written something like 2 million words. The blog’s been a really great way of getting good at writing succinctly. Often, when I really hit form, a blog will be almost perfect as a routine; then, if I take it on stage and play around with it…’

“No,” said Richard. “I didn’t start the blog with any intentions other than thinking it would be a good way of getting people to come to my website every day. With all the stuff I’ve put on the internet the impetus, really, has been I’d rather get this stuff out there than just sit there either not doing anything or doing stuff which nobody ever sees.

“Over the last ten years, I’ve written quite a lot of scripts and, since Time Gentlemen Please, I’ve only had one that was actually made for TV – and even that was just a one-off thing which didn’t get to a series. I’ve probably written 8 or 9 different pilots. I got paid for them all, which is great, but it’d be nicer if they had got made as series because then you’d actually get paid some proper money.

“I’ve always felt like I’ve had a lot of ideas and TV and radio haven’t always been… I mean, I’ve always done OK, but they haven’t been desperate to employ me. So it’s kind of nice now you can go on the internet and just show you can do something. It’s hard work and I think a lot of comedians don’t get this about the business: there’s so many people trying to be comedians and writers now and a lot of them work really, really, really hard and, if you’re not prepared to work as hard, you’re not going to break through.

“But can you make any money out of all this hard work?” I asked.

“Well, I think you can,” Richard told me, “because, if you believe in yourself and you’re good… I mean, I would say I am giving away for free maybe 70% of what I do. And then I tour and then I do DVDs and I make money on that and doing bits and pieces here and there. I’m making more money now than I’ve ever made before and I can’t really sit down and work out why that is – apart from the fact that the podcasts I have done have trebled my audience.

Even after their TV success with Fist of Fun, Richard (left) and Stewart Lee were not getting enormous bums on theatre seats

“Even directly after we were on TV with Lee & Herring, I might sell 30 tickets for live shows or, if I was lucky, I might sell 100 tickets. I would perform in London and 50 people might come and see me. That was directly after the TV series. People knew who I was and we had fans, but they weren’t coming out.

“Then I stopped stand-up; did the blogs; came back to stand-up; started to do the podcasts; did the Edinburgh Fringe pretty much every year doing different types of shows; then I started touring the shows; and, over the last 12 years, I’ve toured a show every year.

“We started doing the podcasts almost exactly six years ago. We gave the podcasts out for free but, if I said on the podcast Oh, I’ll be in Bristol this week, if there were 100 people listening in Bristol and 50 decided to come along, that would immediately double my audience.”

“I’m not like a TV presence,” Richard shrugged. “I can’t go out and do a 1,000 seater. I can play in 500-seater theatres and I’ll still get 100 people in some places, but I’ll probably average about 300 people which is a very good living. When you do 30-50 people, you’ll break even and maybe make a little bit of money. When you get 300 plus, you can make a lovely living touring the country if those people keep coming.

“If you get on TV, yes they’ll think Oh, it’s that guy on TV and lots of people will come and see you, but a third of them will not really know what to expect. The way I’ve done it, which is much harder work though more satisfying, is to do 12 consecutive years of touring on my own. So maybe people who have enjoyed that show will come the next year and bring a friend. And the people who have enjoyed the podcasts may come and maybe bring a friend.

“Audiences have definitely built that way. I figure all the stuff I’m doing online for nothing will bring in new fans.”

“And last year at the Edinburgh Fringe,” I said, “you were giving away free DVDs to entice people in to your live show – because, quite rightly, you thought the big, expensive street posters have very little effect.”

“Well,” explained Richard, “people get sucked into what you supposedly have to do and, especially in Edinburgh, things get more and more expensive. I think those large billboard posters and lamp post posters are mainly ego for the performers. I just don’t think it’s worth £3,000… If it were £1,000, maybe. People think it shows a presence, it shows TV people that maybe you’re a name; but there are SO many of them that it doesn’t.

Tim Vine’s 2006 Fringe poster announcing he was not there

“Ten years ago, if you were the only person doing that maybe – or if you were Tim Vine when he had that enormous poster saying he was not appearing at that year’s Fringe – That was worth its weight in gold.

“But what I’m saying is, if you have £3,000 to spend on publicity, try to think of an interesting way to spend it that will actually attract attention. People are not walking past those billboards any more thinking Ooh! He’s on a billboard. I’d better go and see him.

“People are wise to it and people are wise to the 5-star reviews all over the place: they know it’s just people putting up their own reviews from websites. It’s fine, but it doesn’t mean anything; it’s just one punter’s opinion.”

“And giving away the free DVDs in Edinburgh worked?” I asked.

“I’m not sure it completely worked,” said Richard, “but it didn’t make any difference. So rather than spending £3,000-£4,000 on posters, I had something to give away and we’ve sold 200 or so online which has got half the money back and I have some left over which I sell at gigs, so I will make the money back.”