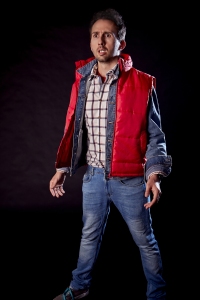 Nathan Cassidy – Back to Birmingham

“If you really wanted to live dangerously,” I told Malcolm Hardee Award nominated comedian Nathan Cassidy, “you should have booked your Edinburgh Fringe show into the Cowgatehead venue.”

“There’s only one thing you can’t make jokes about,” said Nathan, “and that’s Cowgatehead. Those comedians have got thousands of pounds and, in their minds, maybe their whole careers riding on it.”

As well as being a comedian, Nathan runs a company which offers tourist trips round the ‘real’ London and ‘real’ New York. But, he complains, everything  is getting too safe and gentrified in London.

“Are you a Londoner?” I asked.

“I was born in Birmingham. Even Birmingham’s nicer now. There’s no rough places  for me any more.”

“Certainly not Brownhills,” I said, attempting a North Birmingham accent.

“That,” said Nathan, “is exactly the Brummie accent I am going to use in Back To the Future III.” 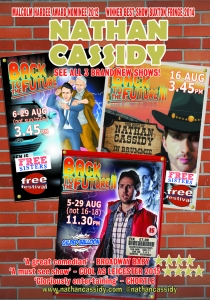 Back To The Future stage shows I, II & III

Nathan is performing three comedy shows this year – Back to the Future I, II and III.

“Why did you do the first Back to the Future?” I asked.

“I guess I’m at that part in my life where I’m looking back 30 years and looking forward 30 years. I went to see Back to the Future at Secret Cinema at Westfield in East London and that’s what triggered my thought. Secret Cinema fuses theatre and film. They had bought a great plot of land but they had to cancel the first week of shows. 3,000 people were turning up every day and they cancelled the first day only about half an hour before the start time.

“They didn’t allow you to take your mobile phones because they didn’t want the location revealed. So everyone, including me, had left their house dressed in 1950s gear – some people had travelled from the Isle of Wight – 3,000 people all getting to the door and these ten security guards having to turn everyone away and getting abuse.

“There was a guy dressed as Doc Brown shouting at this security guard saying that he had ruined everything and it was unforgivable. Then he turned to me and says: Do you want to come for dinner? I had no excuse not to, because he knew I was supposed to be there for the next six or seven hours and I didn’t have my phone on me. And he turns out to be the grumpiest cunt I’ve ever met and it got me thinking: I’m in the middle of my life and I’m turning into this grumpy guy. I feel my life is falling away.

“I was told by my step-dad when I was about 15: As soon as you hit 30, your life will start to accelerate. And he was absolutely right. I’ve got two kids now – 5 and 7. My 7-year-old is doing stuff I did about 30 years ago and I’m thinking about my own death in maybe 30 years time.

“So Back to the Future II is about living again. I’m not religious, but I’ve recently got into the idea of reincarnation. Maybe it’s because I’m hoping for something that may not exist.”

“Yes, Back to the Future III is about some regrets I’ve had from the past. My whole school was not very nice to this one particular person.” 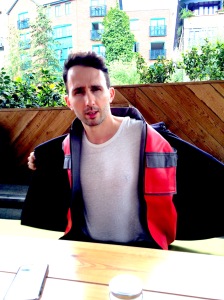 “No, not me. I was not a bully as such, but you’ve always got these kids at school who are bullied and your excuse to yourself is you weren’t old enough to stop it because you were 12.

“Then you think: Maybe I WAS old enough. So it’s about wanting to go back in time to stop that happening.

“I’ve written a few novels too and one of my books is about this – about bullying at school and wondering what happens to those kids you haven’t seen for 30 years.

“I think your life is pretty much set in stone in those years and there’s nothing you can do about it unless there’s massive serious intervention.”

At this point, Nathan had a coughing fit. When he recovered, he told me:

“I did this show last night with Trevor Lock and I’ve never taken drugs in my whole life and I did this bit on stage about not taking drugs and then somebody from the audience handed me something and said: It’s bong.”

“Bong. I have no idea. I don’t do drugs, don’t hang around with anyone who does drugs even as a comedian. But this person handed me this thing and I took a suck and then thought: What am I doing?”

“A big bong, yes. And I’ve got this thing at the back of my throat now and I’m thinking: Why have I resisted drugs for 40 years?”

“You are going to turn on to drugs?” I asked. 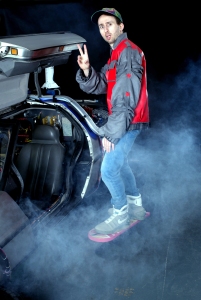 “That’s partly what Back to the Future II is about,” explained Nathan. “If I believe I am going to live again – as I do – why don’t I just get fucked-up now? Why don’t I start living like Chris Dangerfield? None of my favourite musicians or comedians have never done drugs. So, if I’m going to become who I want to be, I’ve gotta start…”

“I don’t feel like I’ve truly seen the dark side of life.”

“I never took drugs,” I explained, “because I worried it might push me over an edge I thought I might be too close to already.”

“Exactly,” said Nathan. “But, if it pushes you over the edge, then you’re going to find something that… I’m not saying just drugs…”

“You must have done something in your life?” I asked.

“And,” I pointed out, “you’re running an international business that takes people to ‘real’ places. What on earth IS the real New York? Probably horrible.”

“That’s it,” said Nathan. “To see the dirty side of it. The guy I started the business with has been on heroin, come off heroin, is covered in tattoos, has done crime, come out of that and he ends up this beautiful man. He’s done all that and now he can talk from a perspective of having done that. I’m not advocating this bad way of living, but Back to the Future II is about What do I do in the next 20 years? Do I take things a new way in my life?”

“You can’t,” I suggested. “You’ve got two small children and a wife.”

“What do you mean Can’t?” Nathan asked.

“You don’t,” I suggested, “want to support the Colombian drug cartels or the Mexican gangs. There were 43 people killed in some shoot-out in Mexico this morning. If you take heroin…” 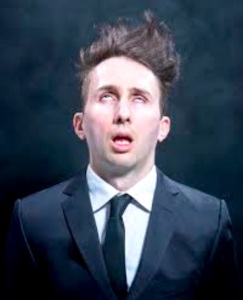 Nathan reckons he has just been too clean-living

“Define the dark side of life.”

“I dunno. But I have been too clean-living.”

“What are these other things that life has to offer?” I asked.

“Maybe your Unique Selling Proposition is that you’re Mr Clean.”

“You can’t wear a leather jacket and be clean,” I said.

“I’m wearing a Back to the Future jacket just for you. I’ll do anything to publicise the show.”

“I still,” I said, “want to know what all these dark things are that aren’t paedophilia or heroin.”

“Trevor Lock was telling me a story about severed heads on crosses in South America. Being alone with that and being scared. Life over-and-above the mundane. You can get a sense from older comedians that they’ve seen everything.  If you’re a 20-year-old comic, it’s all about wanking, living with your parents and thinking you might be gay.

“If you want the ultimate dark side,” I suggested, “the ultimate thing is to go along and join ISIS.” 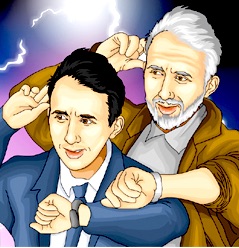 “I think that’s maybe a step too far.”

“But you keep implying there are no steps too far. You could be a thrill killer like Leopold & Loeb in America or Mary Bell in this country.”

“My own two children, maybe.”