One man’s day at the Edinburgh Fringe: name-dropping, walking and hugging

Jo Romero – Scenes of a Sensual Nature with comic actors

I was sitting in Cowgate waiting to go into Jo Romero’s Scenes of a Sensual Nature – four playlets with Jo in various states of undress, Mick Ferry stripped to the waist, Gary Colman doing a sex tape, James Dowdeswell looking nervous and David Mills in a vest. Something for everyone.

There I was, sitting in Cowgate typing a text message, when I heard a voice say: “Are you interested in comedy shows?”

It was a comedian whom I had seen in clubs a few times. We had never met. He handed me a flyer and pitched his show. When he left, I checked and, sure enough, we were Facebook Friends.

But we had never met.

Later, waiting to go into the Noise Next Door’s Really, Really Good Afternoon Show, I bumped into comedian Diane Spencer. She told me she had had ten Norwegians in her Power Tool audience the previous day. I told her comic Lindsay Sharman had had five Norwegians in her show the previous day. It sounded like they were different groups of Norwegians. I went and joined the Noise Next Door queue. The two people behind me started talking in Norwegian. Totally true. (I used to work for a Scandinavian TV company.) Inexplicable but true.

The Noise Next Door are a faultless improv troupe. Why they do no have a TV series is more a reflection on TV producers and commissioners rather than on them.

After the Noise Next Door show, I went to see the Laughing Horse Free Comedy Selection show.

On the way, I passed Bob Slayer’s double decker BlundaBus venue. Bob told me: “I have a blocked urinal. Somebody was sick in it. This is the exciting end of running a bus venue.”

At this point, performer John Robertson joined us.

“Parking this bus,” continued Bob, “was easy but these toilets have cost me £1,000. I can’t afford to have them filling up. They are no-poo toilets. I hope people don’t find them. There are no signs to them. Have you seen the sign inside?

Bob Slayer and John Robertson at the BlundaBus yesterday

“Bob’s toilets,” said John Robertson, “are the only venues on the Fringe you don’t want to have full.”

As John Robertson and I walked along the Cowgate, we saw comedian Patrick Monahan coming towards us.

Sure enough, Patrick spread his arms wide, said nothing, hugged us both simultaneously and then continued along the Cowgate.

John and I then bumped into eccentric performer Mr Twonkey. John went into the Underbelly venue. I continued walking along with Mr Twonkey, who told me he had been unable to think up a decent idea to win an increasingly prestigious Malcolm Hardee Cunning Stunt Award. I tried to console him but it proved impossible.

When I got to the Laughing Horse Free Comedy Selection show it was, unlike Bob Slayer’ blocked toilet, filled to the brim and overflowing. I stayed to see Juliette Burton’s set. She hugged me. I left.

This gave me time to go and record a Grouchy Club Podcast with Kate Copstick. 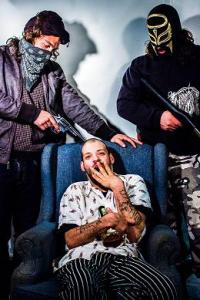 Tim hugged me as I left and I went to have a chat with Kate Cook, who had asked to meet up so she could plug her show Invisible Woman.

“Food is essential here in Edinburgh,” she started.

“Yes,” admitted Kate, “but somehow you really notice it is working as fuel here. I can’t eat just before a show and I ate too early this morning. So, by the time I was getting towards the end of my show today, I could feel the madness setting in. You have seen my show. It’s quite physical.”

“I miss my dog,” said Kate. “I think animals keep you sane. I do feel a little bit mad in Edinburgh, but maybe you need to. It’s completely mad here. In a good way.”

“People,” I said, “talk about all the performers’ egos but I suppose all the vulnerabilities are feeding on each other too.” 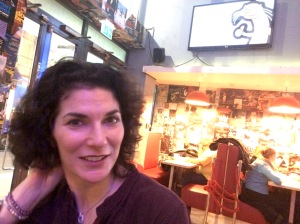 Kate Cook – she misses her dog, but has a supportive Wolf

“Yes. Apparently it takes liquids but not solids. That is a bit of a drawback in a toilet. Where is your show?”

“The Mash House. It’s very nice. It smells of wood.”

“Any humorous show-publicising anecdotes?” I asked.

A wooden leg, one arm, a pipe and chickens

“I play lots of characters in the show,” said Kate. “Invisible Woman. You’ve seen it.”

“It’s very fast-paced,” said Kate, “and yesterday I got some scenes mixed up, which has always been my nightmare. I was being the man with a wooden leg and I should’ve been the posh lady with one arm. So I had to apologise to the audience and make a joke about it and then become the lady with one arm. And, during the same show, a box full of rubber ducks fell off a chair backstage and you can imagine what sort of noise that made.”

“Chickens,” said Kate. “They were chickens.”

Then there was a distraction and we lost that line of conversation.

Kate Copstick with low-key lip-syncing at the Haus Party

Frankly, you can’t go very wrong if you perform as a brother-and-sister German neo punk band duo with guests Paul Foot being surreal, a big black transvestite called Le Gateau Chocolat who can sing anything from Wagner to Whitney Houston, critic Kate Copstick lip-syncing a song and Malcolm Hardee Comedy Award winner Adrienne Truscott taking her clothes off. It was the second time in a week that I had gone to a show where Adrienne Truscott took her clothes off. I am not complaining. Just saying.

After all this finished, Kate Cook hugged me goodbye and I left for The Illicit Thrill at the Voodoo Rooms – a show which had been recommended to me.

When I arrived, Frank Sanazi’s Iraq Pack were having photos taken with their fans.

I also bumped into Paul Eccentric, who is here in Edinburgh as a punter until, on Wednesday, his book The Edinburgh Fringe in a Nutshell is launched in Leith. (I blogged about the London launch last month) He had a large bandage on his hand.

“What happened?” I asked.

“It moved,” he explained.

“That’s the trouble with trees,” I said.

Waiting for The Illicit Thrill to start, I checked my e-mails.

Mark, a man of mystery who runs the British Comedy Guide website, had sent me a piece about Abigoliah Schamaun, who has been plastering fake review quotes and stars on her show posters. He suggested she might be a worthy Malcolm Hardee Cunning Stunt Award nominee.

The quotes include: “A true talent!” (Just One Person’s Opinion) and “Funny. Hilarious. I laughed Loads!” (Rather Redundant Mag)

I must have not paid attention when The Illicit Thrill was recommended to me. It turned out to be a fairly straight hour-long strip show. Not really a Fringe show, more a well-produced strip show. In its own terms, it was extremely well-done, although excellent local rock band Black Cat Bone looked mildly embarrassed. We were given fake dollar bills on entry to stick in assorted garters and gaps.

Whereas Adrienne Truscott had been completely naked earlier in the evening, the professional strippers in The Illicit Thrill kept their lower regions thong-covered. Unless I missed something. I do not think I did. I am not sure what this difference in nudity between art and populist perv entertainment demonstrates sociologically (The Illicit Thrill’s slogan on the dollar bills is: Teaching Edinburgh To Perv Responsibly). But I am sure it must illuminate something.

The Illicit Thrill included Mother Masochista – a stripping nun – and, separately, JC – a Jesus Christ male stripper of whom I have been an admirer ever since seeing him in 2013 at a Frank Sanazi extravaganza at the Fringe.

Last night, he did not go as far as he did in that extravaganza, but apparently he returns to the Fringe in his own show next week: Christ on a Bike.

After that, I walked back to my flat at about 02.30 in the morning with the slightest of toothaches, amid a fairly common Edinburgh late-night event which is unbilled and rarely mentioned – flocks of giant white seagulls swooping low and fast along the roads and around the junctions, as if looking for small dogs, children or crushed egos to snatch off the darkened streets.

Sometimes I think I might as well have taken drugs.

One response to “One man’s day at the Edinburgh Fringe: name-dropping, walking and hugging”