Copstick, corruption and Coke in Kenya 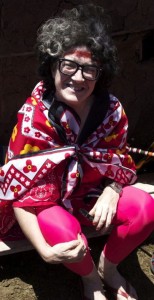 Comedy critic Kate Copstick is currently in Kenya for her charity Mama Biashara. I occasionally include highly edited pieces from her diary in this blog. (For unedited versions, see the Mama Biashara Facebook page.)

Today, here is another one. It starts a week ago.

My friend Rebecca is dead. She died last night. We have been WhatsApping each other morning and night but she stopped replying on Wednesday. I don’t really know what to do. She was so sick and in such pain and people are saying things like “She is at peace now” but I know Rebecca would rather not be at peace and be back here with a good roast chicken and a cheeky MummyJuice. Rebecca saved my life. When I was in what they are wont to call “a bad place” and doing all manner of silly things of a hugely self-destructive nature, she saved me. She would just not let go until I sorted myself out. And now she is dead.

I am not sure what I am doing but I suppose I had better do something.

I look for a mosquito net (which I keep failing to buy) but settle for a plug-in mozzie repellant called DOOM instead. Mozzies are not the horror for me that they were as one of the great things about being fully ‘roided-up is that the bites no longer swell up like ghastly pink humps but just behave like normal bites. So I barely notice them until I run a hand over my skin and notice it is as if I have had some of those implants where you get ball bearings put under your skin.

The newspapers say the teachers’ strike is over but there is much grumbling. The story on the front page shares space with one about a female Cabinet Minister who is being asked to explain a 700 million shilling deficit in her budget. The money has just disappeared. From a government which keeps saying the country does not have enough cash to give the teachers a raise.

I miss my conversation with Rebecca and play 23 games of Solitaire instead. God bless smartphones.

It is Sunday and I am feeling ridiculously sorry for myself.

I have washed my hair (I can highly recommend Toss Liquid Laundry Detergent – it gives a lovely soft feel) and cleaned the toilet. Someone in the block of flats which overlooks our little compound is listening to first a Take That compilation and then Terry Jack’s “Seasons in the Sun”. At least it is robust competition for the singing coming from the churches which we have on three sides. Having said which, stand anywhere in Nairobi and you have churches on three sides of you. It makes Rome look positively Godless. I have just walked up the road to Shalom for milky coffee and free WiFi. The cloud of dust which enveloped me as the cars passed on their way to Cornerstone Church has meant that the Toss will have to come out again later.

I am awoken by a text from Doris telling me she is at the Showground with 86 Mama Biashara ladies and 30 boys. She had been trying to get our people work at the Nairobi International Trade Show – the Big Event of the Nairobi year in terms of business and enterprise and the place where Mama B’s whole Sugar Cane Empire kicked off last year.

Having been knocked back by everyone for lack of paper qualifications, suddenly word of mouth kicked in and our ladies are running the Kenya Police Canteens (three of them – civilians, scrambled-egg-on-shoulder and lower ranks) and doing all the baking on quite a posh cake stall. Our lads are portering on the first couple of days (for good money and, again, word of mouth reassured the employers that Mama B’s people are Good People). Having actually got into the Showground (at 6am) and now that everyone knows what they are doing, Doris is busy finding little spots where Mama B peeps can do business. We will catch up later, she says.

Doris arrives from the Show and I get the skinny on what is happening.

More Mama B people are being added all the time… To the 86 another 20 mamas and then to the 30 boys 10 more to do facepainting, 10 to sell water, 10 to sell ice cream and 10 to sell coffee at night from a thermos urn.

To Kijabe Street market for heaps of loveliness for the Emporium. Now when I buy from Mwangi and Dorcas and a few others we do our business under a sack or behind a tent because Chinese eyes and cameras are everywhere looking for new designs to copy and mass produce. Mwangi is despairing.

I collect my massive order of medicines from the pharmacy and reassure the lovely Ruth that Goff is well although his mother in law died. She sends her condolences. There is a slight hiccup when I discover that the meds for the old guy with syphilis come in the form of a vaginal pessary. But other than that and my despair at the continuing stanglehold of The Clap upon the wrinklies of Awendo, the pharmacy trip is very jolly. I even get a huge very strong box to take away (great for packing for return trip).

Rebecca’s cousin texts me to say they are going to be turning off Rebecca’s phone and giving me her number so I can stay in touch about the funeral.

The Showground is divided (like everything else in Kenya) into those with money and those scrabbling in the dirt to make a living. And those with money are only really interested in making more. And so, as the big companies like McDonalds and KFC have noticed that their takings were not reaching ‘targets’ on the first couple of days and also noticed that all the little mamas selling chapatis and Kenyan food were doing a roaring trade down where the little people gather, they simply bung the City Council kanjos something and – hey totally fucked up presto – last night dozens of the mamas were rounded up and arrested.

They have their medical certificates … they are officially on site … but money talks. Doris starts her day by chasing down the van with our few mamas (most of ours are working in big kitchens on site) and bunged the officers another wedge to get them out. Our neighbour Lucy had all her equipment stolen and all her ladies taken to Langatta Women’s Prison where they will wait till someone pays a bribe to get them out.

The Prez is supposed to be coming tomorrow so that is when things will really take off. Meanwhile something WONDERFUL has happened. Quite without any work on our part. Doris takes me to one side and says we were offered a fridge by Coca Cola.

I cut her off and explain that ANY interaction with the massive global evil that is the Coca Cola empire will result in the withdrawal of all Mama Biashara support. For which read money. And me. Doris knows this and they wanted a guarantee of our tiny kibanda buying rather a lot of their appalling world diminishing product.

“But what of this…?” says Doris as a large truck marked Club pulls up. Coca Cola have simply bought everything that stands in their path here in Africa and so most drinks, should you care to look at the label, are just Lupine Coke in Local Goat’s clothing.

But Club – it turns out as I descend upon the truck and ask to inspect a bottle – are an entirely Kenyan operation. The parent company is called Highland – famous here for water and for squash. I am beside myself with delight.

I help them squeeze the fridge into our tiny kibanda. We are at the speartip of the fight against Coca Cola in Kenya. Their new range is EXACTLY what CC (I cannot even bring myself to write their name again) offer – cola, lemon and lime (Sprite), Orange (Fanta), Bitter Lemon (Krest – a once Kenyan brand which they bought) and Ginger (Stoneys ditto). Plus fruity drinks like mango and guava. I am on a mission. I pay for twenty bottles and everyone who comes up and claims only to drink C gets a free sample – you don’t like it, you don’t buy. They ALL bought ! All the sodas are selling.

Then I meet the Head of Marketing for Highland. He is, oddly, Greek. We are meeting next week to see what we can cook up to help push the product and bring about the downfall of The Evil Empire in Kenya.

Apparently, the City Council have been around again demanding a £50 bribe from every stall who want to cook anything. The Big Companies had a meeting and demanded that all food of all kinds should be banned from the little people area. Only toys can be sold. So the City Council (notice initials also CC) came around to demand the bribe to ignore the bribe that they had got from the Big Companies. They have a go at Doris but we are not cooking. All our sweeties are wrapped. And now we have Highland fighting our corner. We have their fridge. We are their people. She stands her ground and we are left alone. They are like some sort of foul vermin that attacks the weakest.

They arrested our neighbour Lucy and held her in Langatta until she paid the bribe. They really are filth. When you walk in the posher areas of the show there are no City Council to be seen. At all. They know where their victims are.

I chat to another Top Bod from Highland. Doris does an AMAZING pitch about why sex workers are the best sales people (I pitch in with “You cannot sell anything until you can sell yourself”) and we also come up with a possible slogan… “Pleasure was our business, now business is our pleasure” ??? I chat away about the plusses of having people on the ground, especially when, as Club is, you are trying to break into the slum and poorer areas. He is interested and we part with an exchange of business cards and promises to meet.

I leave at about 6.30pm. We rock off down the road and are stopped from turning right down the empty usual road by a fat twat of a policeman. We are sent off down the road towards Ngong Forest. Along with a massive jam of cars. Ngong Forest also known as Ambush Alley. With dozens of cars crawling through it. The police have decided to create a jam further up Ngong Road so that the main road to the Showground looks clear for them. Bastards. We take a shortcut across a football pitch and I get home.

Shortly after that there was a massive barrage of gunfire from the Showground. Like war had broken out. So much that I thought it was fireworks. What had happened, Doris explains, is that the KDF (Kenya Defence Force) had come into her area, told all the citizens to ‘lalla chini’ (lie low) and fired off a massive barrage of firepower into the sky. And I mean MASSIVE. Doris and the others were left cowering in the kibanda on the ground. As were all the other little people. The KDF personel announced to the little people that they wanted to show “who is in control here”. Quite scary really, as they are psychopaths to a man. A bit of gunfire on the Ngong Road too. However I manage to sleep like a log.