Zuma Puma is on her way to Mexico via Canada: “Clown is nothing like improv!” 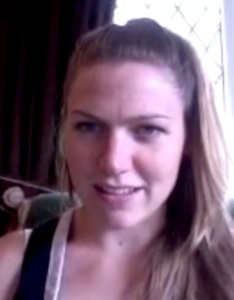 Zuma via Skype, going to Mexico via Canada

Canadian performer Zuma Puma aka Nelly Scott is leaving Britain next Thursday. She has left her London flat and was with family up in the Midlands when I talked to her via Skype.

“Why are you going back to Canada?” I asked.

“Because it was £100 cheaper and I can visit my family in Toronto. I might even teach a clown intensive at my mum’s university – Brock University. She teaches playwriting and directing there. I am going to Mexico on a one-way ticket.”

“Exactly,” said Nelly. “I love the Mexicans. I have wanted to go there for a very long time.”

“Why? Are they lacking clowns in Mexico?”

“Yes. I’m going to work with my friend and his company La Bouffant Sociale. He was my clown partner in the Cirque du Soleil School in Montreal. I studied there for a year – L’École de Clown et Comédie.”

“You are going to Mexico City?”

“We are just meeting there and then we’re going to a salty beach where we have a 15-day artist residency, building a show out of beach garbage. So that’ll be exciting. Then there is a tour in Mexico.”

“But before you go, you’re busy in London,” I prompted.

“You saw it in Edinburgh and said you liked it.”

“It’s a clown farce: basically Noel Coward’s Blithe Spirit as told by three complete idiots. A two-layered story of what’s happening in the play and with the players beneath the play.”

“And then,” I said, “your last Lost Cabaret show in Stockwell on Friday.” 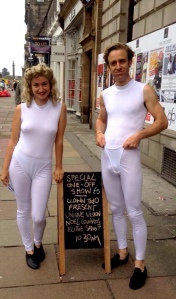 “Well, it’s not the last. I’m handing it over to Nathan Lang and Annie Bashford who will be continuing it monthly.”

“Until you come back from the Americas?” I asked.

“Yeah, but I don’t know if I will come back to London. I might come back to Bristol. I feel I’m pretty much done in London.”

“You’ve been invited back to do a full run of One Man, Two Ghosts at next year’s Edinburgh Fringe at the New Town Theatre.”

“Yes. I will be back maybe in June or July next year to take One Man, Two Ghosts to the next stage.”

“Yes. At The Pleasance Theatre in London on Saturday and Sunday.”

“What is Clown Life Intensive?” I asked.

“There are bits of themselves that most people don’t want to admit – they’re OCD or forgetful or a bit slow. Everyone’s got an issue. It is taking that issue and amplifying it, owning it and saying Yeah, this is a part of me. For instance, in One Man, Two Ghosts, I play a bit of a star diva and it’s all about me and how good the show is and a perfectionist and that IS me – that’s who I am. It’s just amplified to the next extent where everyone can laugh about it because it’s something and someone they all recognise.

“Clown is honest and it’s real. It’s liberating for audiences but also for the performers and my objective with the workshop is not for everyone to leave saying: I am now a clown! I am interested in people who are interested in personal development and understanding self and owning themself as a person and understanding how they connect with audiences and relate to people in life.

“Clown has been the most healing and incredible tool for personal development in my life. And there are loads of tools and techniques that have a real parallel between life and performance that I want to teach.

“It’s not like a weekend of intense guru-type development. I’m not there to be a therapist. But there are loads of tools and techniques and exercises that can teach someone a lot about themself and which are loads of fun. It’s basically a weekend of insane amounts of laughter and play, which is good for anybody… with the added bonus of being challenging at times. It is rewarding for anybody.”

“You did the Gaulier course in Paris, didn’t you?” I asked.

“Why would these people not go to Gaulier instead?”

Sacha Baron Cohen – The hardest thing he has done? (Photograph by Michael Bulcik)

“To go to Gauilier, you have to be the most committed performer in the world. Gaulier is the hardest school anyone’s ever gone to. Sacha Baron Cohen said it was the hardest thing he’d ever done in his life. You have to really want to be a performer to go to Gaulier.”

“Because he is so challenging. He does not accept anything that is not your most brilliant. You are shit until you find magic and how rare is it to find magic? When you have the whole audience in your hand, that happens once in a while and he teaches you to recognise when that happens and how to make that happen as much as possible. You are not hungry enough as a performer until you want every performance to be at that level. That’s what he teaches.”

“As long as you don’t say again that Clown is just like improv. Last time you said that, I had to write this whole post about No! It’s nothing like improv! It is so far from improv.”

There. I have said it.