At the Grouchy Club this afternoon, Kate Copstick got worried about the fact Italian comic Luca Cupani has a new girlfriend. Copstick is of the opinion that happiness is not a good ingredient for a comedian’s emotional make-up and that having children is worse. She lamented good, edgy comedians reduced to talking on-stage about their children’s cuteness.

I tend to agree. I remember Charles Aznavour being asked why all his songs seemed to be unhappy. Why did he never write songs about happiness? He said because, when people are happy, they are pretty-much happy in the same way. But, when people are unhappy, they are uniquely unhappy because of specific circumstances. So their stories are more interesting.

As with songs so, perhaps, with comedy. 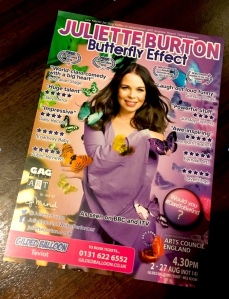 This afternoon, I saw Juliette Burton’s Butterfly Effect show in a totally fully room. She has sold out her last two Edinburgh Fringes, her recent Brighton Fringe shows and, so far, every one of her shows at the current Edinburgh Fringe. I know why. She makes audiences happy – and this show is about being kind to other people. The only criticism I have ever heard of her is that she is too Sally Sunshine happy. But, to get there, the actual meat of her shows is a string of madness, emotional turmoil and upset. What holds the happy-making shows together is actually the narrative glue of unhappiness.

Interestingly, tonight I also saw Shit I’m In Love With You Again. This is, in its effect on the audience, a feelgood musical anecdotal autobiographical show from Canadian Comedy Award winner Rachelle Elie. But, though feelgood and jolly, again the narrative goes through unhappiness to get to the comedy and the surprise ending, which may support Copstick’s point.

Meanwhile, as every year, from a slow start, people are now pulling cunning stunts in a desperate bid to win an increasingly prestigious Malcolm Hardee Cunning Stunt Award.

Man in a balaclava in a corner not saying anything

And, in today’s increasingly prestigious Grouchy Club, Sir Richard, one half of Bob Blackman’s Tray (the other half being genuine Malcolm Hardee Award winner Johnny Sorrow) sat in a corner and said nothing.

This evening, a webpage appeared, claiming he had been nominated for a new (fictional) award – The Malcolm Hardee Person Most Likely To Sit In The Corner And Not Say Anything Award – and got 5 stars from Scotsman critic and Malcolm Hardee judge Kate Copstick.

In fact, we do not fully discuss the nominees until noon next Monday.

I can exclusively reveal here, though, that one nominee for a Cunning Stunt Award may be Scotland’s former First Minister Alex Salmond – for hinting on BBC Radio 4’s Today programme that he was going to tell a sadomasochism story involving Kirsty Walk on his Edinburgh Fringe chat show. 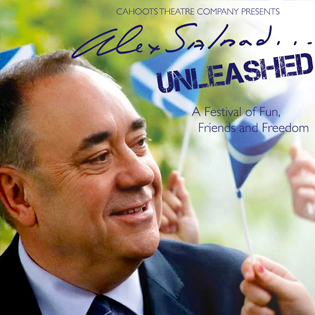