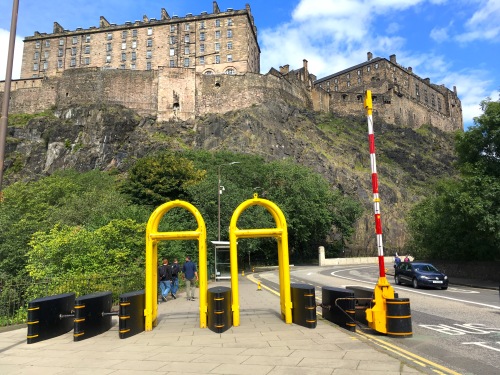 The Edinburgh Fringe splintered from the Edinburgh Festival 70 years ago and, like Christianity, has been splintering ever since.

I always try not to ‘review’ shows or acts. I think I may have failed today. When I do this, it never ends well for me. 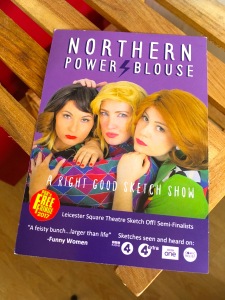 I have a tendency not to like character comedy if the characters are too close to reality; I don’t mind more cartoon-caricature-like or wildly OTT character comedy. Which makes it odd that I like  Cassie Atkinson. I think it must be that the character comedy I hate is the stuff that feels like acting students doing an end-of term performance to their drama school mates. And I guess Cassie is a better actress than most! Or maybe she adds a tiny pinch of herself into even the characters least like her, so I buy into them more. I have no idea.

She does occasionally show a taste for the genuinely surreal – never a bad thing in my eyes though, alas, TV producers have no taste for the actual genuinely surreal. But now she seems to have linked up, more often than not in a blonde wig, with Kat Butterfield and Charlotte Pearson to perform sketches as Northern Power Blouse who, with luck, should be more attention-grabbing for TV producers – not that she really needs them with National Theatre work in her CV.

The genuinely lovely Lucy Hopkins is probably too good for British TV as her show Powerful Women Are About is said to be inspired by Mohammed Taleb’s Witches, Eco-Feminists, The Adventurers of the Soul of the World and is correctly described on the flyer as “part  electro-ritual, part theremin-experiment, part light-fantastic. Ultra-conscious comedy by award-winning, internationally-touring, terribly present clown.” In other words, it is totally un-categorisable – awkward for commissioners scared about the security of their jobs who think in terms of safe elevator pitches.

No great loss, though, as Lucy’s work is very specifically for live theatre.

Becky Brunning is interesting because she can bill herself as being an actor in the popular Broadchurch TV series – which will certainly help her in elevator pitches and may be why her room was literally full to overflowing with punters – some people couldn’t get in. Beaming is/was her debut solo show at the Fringe and, I have to say, was/is weird. 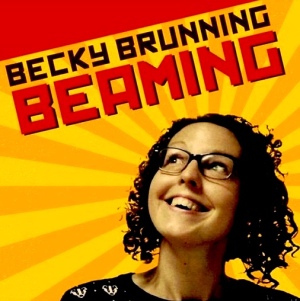 Becky Brunning suddenly pulled out a twist with a call-back

In Beaming, she establishes herself as a likeable, ordinary, modest girl-next-door then progresses to fairly standard, well-structured, low-key observational comedy – driving tests, shopping, crisps (I think she may have lost the audience on the long crisps section of the show) and she even, unless my ears had an audio hallucination, actually delivered the straight non-post-modernist line: “Does anybody in the room like food?”…

But then, in the last 10 minutes or so, she suddenly brings in a totally different and fascinating autobiographical strand about sexuality which would and perhaps should have been an entire show in itself. This strand did not come out of nowhere – it was a call-back to a tiny fact which had been mentioned in passing earlier in the show, but she suddenly pulled out a twist on this earlier comment.

Most of her show was standard and very general observational comedy. When she suddenly switched to very specific, unique personal stuff, something happened. I hate to say she is “one to watch” – far be it from me to be cliché. But I am certainly going to see her next show.

Luca Cupani even appeals to Hungarians

Then I went to see the wonderful Luca Cupani who, at the Malcolm Hardee Comedy Awards last night added to his glittering collection of awards the title Scottish National Russian Egg Roulette Champion 2017.

I thought I had seen his show – It’s Me! – at a preview in London, which is why I went to see it so late in its run here, but he has developed it beyond recognition and, of course, was superb. I can never quite get my head round why he is so good.

In theory, his Italian accent and what objectively is a rather dithery, broken-up delivery should interfere with the flow of the comedy but, for some reason – perhaps because it requires a slight bit of extra attention from the listener (but not too much), he is consistently fascinating. And he knows how to structure a story.

Interestingly, the room today contained Scottish, English, Siberian punters and a  lady sporting a T-shirt saying: I SPEAK HUNGARIAN. She was Hungarian. They all enjoyed it. I was watching the Hungarian lady a lot – her English was not too strong and she loved the show. 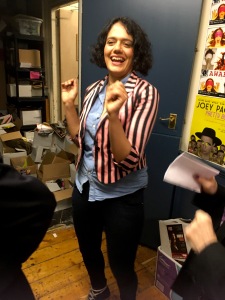 Next stop was Becky Fury, who had hosted the wildly chaotic Malcolm Hardee Comedy Awards Show last night. The chaos was not of her making – acts not turning up, acts turning up late, acts not saying in advance what they were going to do. And she handled it all masterfully, if that’s the right word, making up most of it on the spot – including swallowing a 3ft long balloon and doing a gameshow based on the health warnings on cigarette packets. Literally honking her breasts, of course, is always a crowd pleaser. And so it was tonight in her Molotov Cocktail show, ending with her successful rollercoaster of a Calais Jungle story. She dropped the political sections of the show and it still worked.

I am still waiting for the autobiographical street anarchist show which she has in her: if she ever does it, that will be a unique, perhaps literally fiery Fringe show.

If she does not get arrested.

Or even if she does.

A man conducts himself well

Rounding off the evening for me was a show called Brain Rinse – Puppetry of The Audience which threatened in its publicity to be “immersive” (almost always a horrifying idea).

In fact, it was superbly entertaining for the same reason that Herbie Treehead worked so well at last night’s Malcolm Hardee Comedy Awards Show. Both Herbie and Brain Rinse’s Mike Raffone (say it out loud) have long experience in street performance, so their audience control is second-to-none. A well-structured show; the ability to ad-lib on the hoof; top notch audience psychology. All hail!

That was my day.

Last night, at the repeatedly aforementioned Malcolm Hardee Comedy Awards, Russian Egg Roulette competitor Samantha Pressdee could not stop herself taking her top off. She has a lot of ‘previous’ in this.

And, while I was roaming round the hot and sticky comedy rooms of Edinburgh today, she was out in the fresh air and I do mean ‘out’.

Apparently this was the 10th International ‘Go Topless’ Day and there was a rally in Edinburgh. The stated rules included:

NO-ONE IS IN CHARGE.

AS ALWAYS THE RALLY IS ESSENTIALLY ANARCHIC AS NO-ONE HAS AUTHORITY OVER ANOTHER PERSON’S BODY OR VOICE.

Samantha sent me a ‘report’ on what had happened:

The annual Edinburgh Free The Nipple rally for International Go Topless Day and Women’s Equality Day has been a success.

Members of the public joined in with regular campaigners and an open mic was held as a platform to oppose the censorship of opinion as well as nipples.

Only one member of the public got offended, shouting at protesters: “Shame on you! You’re flaunting yourselves! I can’t bring my daughter in to this space!”

I chased the lady whilst shimming my tits shouting: “Breasts feed children!”

The hysterical woman responded: “I know! My daughter has seen my tits loads of times!” before telling a photographer to “Fuck off!”

I wrote FREE LOVE on my chest in protest of the threatened extradition of alleged hacker Lauri Love.

He is appealing in the High Courts this November on the grounds that, because of his Aspergers and severe depression, he would be unable to cope in the US prison system and would commit suicide.

So there you are.

For what more could one ask?