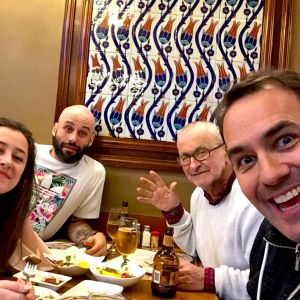 Dave Brooks with his sons and daughter (Charlie on right)

I was asleep today – about 11 in the morning-  when Martin Soan phoned to tell me Dave ‘Bagpipes’ Brooks – an early member of The Greatest Show on Legs – had died, aged 72. Dave’s son Charlie Brooks had announced on Facebook that his father died at the end of last week.

Charlie wrote: “He passed away end of last week. They broke the mould when they made him. Here’s to all of you who played music with him, loved him, got exasperated with him(!) and had fun with him over the years. With the coronavirus situation, we don’t know what will happen with the funeral at the moment.”

(Charlie lives in Oregon; Dave lived in the UK.)

“At some point, there will be a moment to remember Dave and it will involve music and a few drinks. 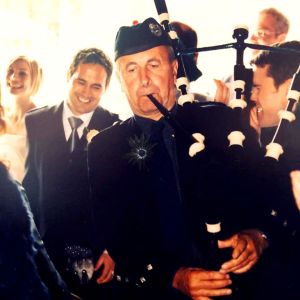 “Charismatic and occasionally cantankerous, but always quick with a joke and someone who definitely lived by his own rules, for better or worse. He was also a brilliant musician, starting as a jazz sax player in the 1960s, then becoming a piper.

“Going to miss you, Dave… everyone is unique, but they truly broke the mould when they made you. They say you can’t choose your family, but if I could, I’d choose you again. So sad I didn’t get to say goodbye. Love you.”

“I don’t know what year or indeed how we came to meet him in the first place, but he was a valued member and was a very funny man indeed.

“Going on tour with ‘The Legs’ wasn’t everybody’s cup of tea: it was a hand-to-mouth existence and a lot of anarchy to put up with, but he fitted in without any trouble and sometimes led the way in outrageousness. 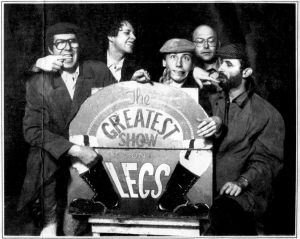 “I performed with him a few times in later years and we both slotted in where we left off. It was simply natural to perform and hang out with him.

“His temperament was sunny and always even but also he was very educational (important when spending long hours in a van), He introduced Malcolm Hardee and me to garlic, which Malcolm hated… He knew what was happening politically and, of course, musically expanded our minds… Above all, I will always remember his wicked sense of humour and infectious laugh.

“He excelled on stage and personally made sketches of ours complete and perfect and, after he went his own way, we had to drop the routines he had made his own. The Human Scottish Sword Dance and Dirty Ol Men were his sketches .”

In 1981, Dave performed The Human Scottish Sword Dance with The Legs on ITV’s ratings-topper Game For a Laugh…

I myself met him, I think, only twice, maybe three times: clearly my loss. As well as having an original sense of humour, he had wide talents.

He was wonderful on the Highland bagpipes (and saxophone) playing Irish Traditional and Scottish Traditional music and jazz with many other artists including Joan Armatrading, Graham Bond, Elkie Brooks, Phil Collins, George Harrison, Dick Hecksall-Smith, Manfred Mann, Count Dracula and The Barber of Seville. Probably also Old Uncle Tom Cobley and all. 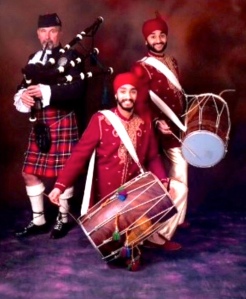 He had an 18-month run in London’s West End as a piper in the stage production of Brigadoon (where he had his bagpipes sent to sleep for 100 years) as well as appearing in the BBC TV production of People Like Us and in the movie Loch Ness.

He also performed and played bagpipes on the alternative comedy scene with Arnold Brown, The Greatest Show on Legs, John Hegley, Marcel Steiner (Smallest Theatre in the World) as well as Keith Allen (whose record company, Dave said, still owed him £60!).

In the US, he was a founder member of infamous band The Don Wannabes.

Back in the UK, he played various Scots and Irish piping at weddings, funerals and divorces and had his own Irish ceilidh band Sham-Rock, sometimes appearing playing the bagpipes with them as the Green Man, dressed in a suit of leaves. He claimed he was thinking of branching out. He is on whistle in this video…

On 29th July 1996, the Corporation of London prosecuted him at Hampstead Magistrates’ Court under an 1890 by-law for “playing a musical instrument (his bagpipes) on Hampstead Heath on three separate counts. This was despite the fact that Dave had been playing his pipes on the Heath for an hour every morning for 15 years without any complaint from anyone.

As part of Dave’s defence, solicitor George Fairburn cited the legal precedent of Jimmy Reid, Highland Bagpiper, who, on October 2nd, 1746 – after the Battle of Culloden – was charged with playing an instrument of war and insurrection. Jimmy stated that his Highland pipes were a musical instrument not an instrument of war (which sounds reasonable). But the Lord Chief Justice of England overruled the original jury’s not-guilty verdict and dismissed their later plea for mercy by declaring that the bagpipes were indeed an instrument of insurrection. On the strength of this, Jimmy Reid was hanged, drawn and quartered. 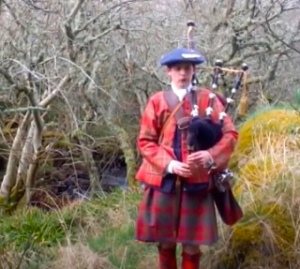 After the Battle of Culloden, they were “an instrument of war””

The 1996 judge – Stipendiary Magistrate Michael Johnstone – said that the case of James Reid and his Highland bagpipes was a gross miscarriage of justice – a point not picked up by the press at the time – and then bizarrely threatened to have Dave Brooks and his Highland Bagpipes charged with bearing arms on Hampstead Heath. He said that, if this interpretation was accurate, Mr Brooks could be charged with carrying a dangerous weapon on the Heath and the penalty could be a prison sentence rather than a fine. He asked the bailiff of the court if he was ready to take Mr Brooks, Highland bagpiper, to the cells below the court never more for his bagpipes to be heard,.

Dave was found guilty on three counts of playing a musical instrument and fined £15 on each count plus £50 costs.

In his summing-up, the magistrate said: “In time of war the bagpipes are an instrument of war and in peace they are a musical instrument”. He dismissed a petition of 2,500 signatures collected around Hampstead by people who liked the Highland pipes. 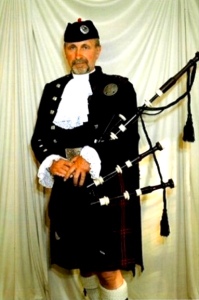 Dave with his Scottish military weapon

Stipendiary Magistrate Michael Johnstone, in delivering his judgment, conceded that many might not consider the bagpipes to be a musical instrument, although he said he was not saying it was one.

When Dave’s case first came to prominence and he became a cause célèbre in piping circles, the College of Piping in Glasgow offered some words of comfort: “Well, if they hing you, dinnae you worry. We’ll compose a fine lament to your memory!’’

Tracks on subsequent albums released by Dave included the evocative Birds Eat Turds, a flute and pipe combination of Irish and Mauritanian songs like A Chailleach do mharrias me/Arts Plume and the classic Did They Come From Outer Space? No. They Came From Hendon Central.

…and playing solo bagpipes with an Indian theme…