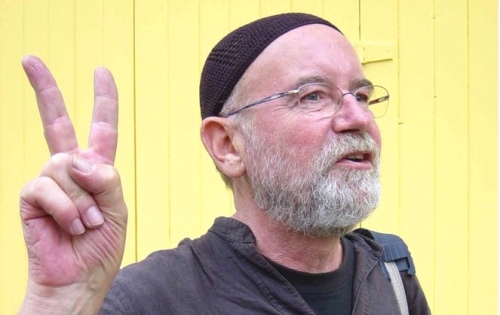 The late Michael Dickinson, circa 2014, as he appeared in the Camden New Journal this week…

Yesterday, I picked up a copy of the Camden New Journal and was sad to read about the death of Michael Dickinson.

You’ve never heard of him? Neither had I until May last year, when I was in Camden Town and saw a man walking backwards. Not just for a couple of seconds or a minute. He walked backwards the whole time.

I posted two videos of him on YouTube. This was the first:

Obviously, I looked him up online and found out he had been doing this for years and was former actor Michael Dickinson.

He had been born in either Durham or Yorkshire, depending on which legend you believe, and he studied at the Manchester School of Theatre from 1969 alongside future actors Julie Walters and Richard Griffiths.

In the 1970s, he became an actor himself. In 1975, he kissed Simon Callow in Passing By, a ‘groundbreaking’ two-man show about a gay romance.

Rather miscast as Jesus in another play, he eventually mostly gave up acting and took up collage art.

In 1982, he held an exhibition in Primrose Hill and a review in esteemed local paper the Hampstead & Highgate Express (the Ham & High), said he was “wickedly adept at exposing the two-faced tendencies and follies of our leaders”.

In an interview in the Camden New Journal on 25th May 2017, he claimed that he could no longer walk forwards and had self-diagnosed his condition as ‘retropulsion’.

He said: “It could be psychological, or I heard somebody say it could be a disease, but I don’t feel unwell apart from that. If I didn’t feel this retropulsion I would much prefer to be walking forwards. When it first started happening it was bewildering, to say the least.

“Occasionally people in cars blow horns at me, which is dangerous because I turn to look at them rather than where I’m going.

“I don’t really want to see a doctor, I feel they’ll just put me on some sort of medication and I would rather not be. I can deal with it and there is no law against it. I’m careful that I had never hurt anybody, although I did hurt myself the other day when I tripped over a branch as I walked through the woods.”

From the mid-1980s for almost three decades – before he started walking backwards – he had lived in Turkey, working as a teacher and artist, sometimes telling fortunes to pay his rent.

He somewhat annoyed the Turkish authorities in 2006 by creating a collage which depicted leader Recep Tayyip Erdogan as a dog receiving a rosette from American President George W. Bush in a pet show. The resultant court case stretched over four years.

In 2008, he was prosecuted for insulting Erdogan by creating the collage. He was initially cleared, but the verdict was overturned in 2010 and then, after shouting a political slogan at police in a separate incident in 2013, he was deported.

Back in London between the two incidents, in 2011, he was arrested in Parliament Square (where he was living in a tent) after shouting “No more war!” during a Remembrance Day silence. He was charged with a public order offence, but the case was eventually dropped.

Permanently in London after his deportation from Turkey, he slept in the streets around Camden Town. While living in a cardboard box next to the Sainsbury’s supermarket there, some people who were squatting in the former police station in Hampstead met him at a soup kitchen and invited him to join their squat.

While there, he ate food discarded by shops and cafés and chucked-away in recycling bins. He made some money by telling fortunes on the street.

It was possibly not too rough an existence as it was a Grade II listed building and they had a wide-screen television set.

He was very grateful to the squatters.

He told the Ham & High: “I would still be in that box were it not for them.” 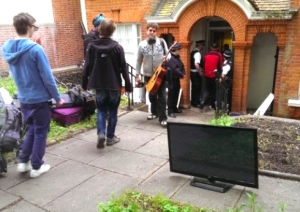 Squatters are evicted from the former Hampstead police station in 2014 with their belongings, including wide screen TV

Eventually, on the afternoon of 2nd May 2014, the police evicted the squatters in the former Hampstead police station and he took to sleeping in a tent in a Hampstead cementery, though he eventually ended up in a legitimate Highgate flat by 2017.

When and why exactly did he start to walk backwards?

Leonie Scott-Matthews of Pentameters Theatre in Hampstead told the Camden New Journal this week: “I remember when he started walking backwards. He was in a play here; he got off the stage and just started walking back­wards. It was just after he had got back from Turkey.”

His friend Charles Thomson says: “It was clearly symbolic I felt. He enjoyed be­ing in Turkey and he couldn’t go back. He was walking back­wards when I last saw him.”

His friend Kay Bayliss added: “He emailed me around Christmas saying he was having phlegm problems that persisted. He was still suffering this when he emailed me on April 11 and now had serious-sounding gut problems… Michael had a very interesting life. At school all the girls loved him. He was so good looking and very complimentary even in more recent times.”

Michael Dickinson died “from peritonitis resulting from a gut obstruction”, in his Highgate bedsit, aged 70, on 2nd July 2020.