Who/Where on Earth reads my blogs?

45 minutes ago, someone asked me if all my blog readers were in the UK, which is an interesting question and the answer is No.

This is often called a “comedy blog” but not by me. I see it as just whatever takes my fancy. I have, in the past, called it a blog mostly but not exclusively “about interesting people doing interesting (often creative) things”.

I am sometimes approached by performers who want a specific comedy show mentioned/plugged… for example at the Edinburgh Fringe or in London.

And I sometimes (not always!) point out that the blogs may be read way after the show has finished and certainly not exclusively in London or Edinburgh or any-pinpoint-where.

If an interview is involved, I record it so that I cannot misquote people. I do make some edits to what people tell me, mostly to clarify what is being said. I take out the umms and erms and general linguistic ramblings which everyone does. Including, very much so, me.

And I try to clarify details for non-UK residents. For example, when “Soho” is mentioned, I usually expand this to “Soho, London” to avoid confusion with Soho in New York.

Most of my readers are in the UK, followed by the USA, then by the native English-speaking countries. There is also a TRANSLATE button on the blog. Who knows what gibberish that may create?

But, as a public service – and as a crass piece of self-promotion – here are four graphics showing where my blogs are read.

The first shows the hits on the blog today… up to 3.00pm… so there are still another nine hours to go in the day.

As you can see, most of the hits ARE in the UK, with a strong secondary following in the USA.

The next image shows the hits received in the last seven days:

I find it a tad unsettling that I appear to be read in Russia.

By whom I dare not guess.

The next graphic shows the hits in the last 30 days: 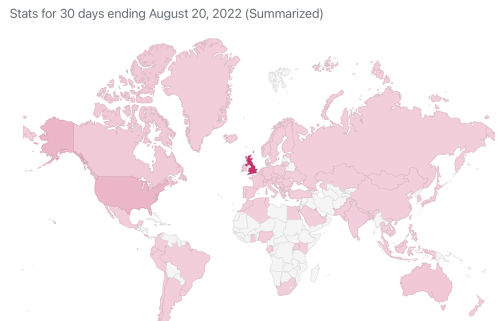 This one is even more worrying because it shows people reading me in China and, as far as I know, all Western blogs are blocked (to ordinary people) in China.

The good news is that I appear not to be read in North Korea.

Finally, a map showing the origin of hits on my blog in the last 12 months.

Clearly I have much work to do in the Faroe Islands, Iran, Yemen, Tajikistan, Honduras, Madagascar and chunks of Africa. I will continue to try to avoid drawing the attention of anyone or, rather, any organisation in North Korea.

3 responses to “Who/Where on Earth reads my blogs?”