Humanity, humour, farting, eccentricity and tragedy at the Edinburgh Fringe

Sal Monello – cutter of hirsute fringes at The Fringe

Yesterday morning at the Edinburgh Fringe, as Irish comedian Christian Talbot was trying to get me to talk coherently for his Seven 2 Ten podcast, I got a text message from American comedian Lewis Schaffer saying:

Sal, the comic barber, is cutting hair for free during the Festival.

Thus I later found myself in Fringe Central sitting on a chair with Sal Monello standing behind me holding sharp, pointed scissors saying:

“I come from Corleone in Sicily.”

“As in The Godfather?” I asked politely.

“Yes. My surname is not Monello… Monello means ‘villain’ or ‘naughty boy’. My father genuinely did escape from the Mafia. In my comedy set, I make it funny but it was rather tragic. My father was in the Communist Party and his name was put on a hit list in 1955 and he had to leave the country. They were going to kill him.

“Ironically, my dad killed himself when he was 66. He had managed to keep his life together while he was working and brought up us seven kids. The minute he retired, he thought Fuck, my life is over.

“He did all sorts of jobs: fork-lift truck driver, railway line worker, hospital porter. The job we liked best was when he worked in a chocolate factory. He used to cut my hair with clippers to keep the cost down and I ended up being a hairdresser. I’ve only been doing comedy for three years. My marriage broke down after 25 years. We divorced two years ago, but my wife left about three and a half years ago. She ran off with a Polish taxi driver. I still love the woman, that’s the problem – fucking damaged me. In order to stay sane, I threw myself into comedy, because you can totally absorb yourself in it.

“I set up gigs, performed and got so involved in it very quickly but, one day, I looked down at my shotgun – I shoot – and thought I’m going to kill myself.

“But then I had visions of him with his arm round her saying in a Polish accent: Oh, it is terrible tragedy. Clearly he was insane. He probably better off where he is. But now we have a lovely house and business.

“So I thought Fuck you, mate – I’m not going to shoot myself. And I didn’t.

“I stayed sane through comedy.

“When I started doing comedy, I quickly found people have to believe what you say.

“If I tell people that on stage, they don’t believe me but I’ve learned that, if a say someone in my hairdressing chair has told me the story, they’ll believe me because they know people are prepared to talk to a hairdresser. I’ve got that unique angle: I can be anybody.

“I’m not doing a show at the Fringe this year but, next year, I want to do a show called A Free Haircut. I’ll get people up on stage and I’ll do a full haircut while telling stories.”

At this point, my former temporary Edinburgh flatmate Andy Zapp passed by:

“My gorilla is arriving tonight by plane,” he told me.

“He must be a very well-off gorilla,” I said.

Then I went to see my new temporary Edinburgh flatmate Mr Methane’s first show at Bob’s Bookshop – part memories of his life professionally farting around the world; part fart demonstrations.

He had managed to get a full audience on his first day with little publicity. The outside door was left open for ventilation; passers-by occasionally looked through the window at what was happening in the front room of Bob’s Bookshop. Oddly, they only occasionally appeared surprised.

“Farting doesn’t get any easier,” he told his audience. “I’ve been doing this since I was 15. After school, I moved on to a sensible career on the railways, followed by a bit of japing around and then into full-blown – if that’s the right word – showbusiness when I was 25.”

As he lay back on the table and splayed his buttocks under his green and purple costume, he explained: “What we do is we open the sphincter muscle – you lads from Glasgow, we’re talking about the turd-cutter here.

“Bob Slayer was saying to me last night Comedy isn’t easy. There’s a crafting. Comedians can work on a joke and it might not be funny for three years then, one night, they just change a couple of words or put a pause in and everyone laughs hysterically. It’s a craft. And then they see me come on stage, I get me legs in the air, I part me buttocks and rip one off and there’s a big laugh from the audience. It seems easy.

“But it’s bloody hard after you’ve farted for a bit to carry on talking. What I do is difficult and I do train a lot. It gets harder as you get older because your body gets less and less subtle. But I do a lot of yoga and stretching the hamstrings, trying to keep the abdominals tight which, at 47, is becoming difficult. Still, I think I’m in reasonable peak farting condition.

“I used to be able to do a full lotus position in yoga, though I can’t do it any more. But, when I could, I noticed I was naturally double-jointed and, when in this position, I could breathe both fore and aft.

Mr Methane, the pumping prodigy, prepares to Fart A Dart

“At school, I became a pumping prodigy in the lunch hour. We used to break into the squash courts and I used to fart How Much Is That Doggie in The Window and Twinkle Twinkle Little Star in exchange for pocket money.

“As you can see, I’ve not progressed 30 years later. A lot of people want to be on stage: Come over here! Look at me! I’ve always thought I want to be a train driver. But always I get pulled back to being on stage. I’m like a reluctant farter.”

If Mr Methane is a reluctant farter, Tim Fitzhigham is a wholehearted eccentric. 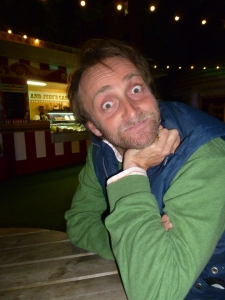 I went for a chat with him last night after his Challenger show which has had extra dates added. We were talking about him appearing on the increasingly prestigious Malcolm Hardee Comedy Awards Show next Friday (23rd).

He is currently thinking about juggling ice on the show, although this may change, as I have already booked Mat Ricardo to juggle spaghetti.

We also talked about him appearing on my Fringe chat show next Wednesday afternoon, at which point he told me about an extra big charity show – only just announced – happening next Wednesday (11.59pm till late) at the massive McEwan Hall venue.

“I had a chat with Charlie and Ed who run it for the Underbelly venue,” Tim told me, “and they have given it to us for free.”

Tim occasionally does OTT gigs called Maxwell’s Fullmooners with Irish comic Andrew Maxwell. Next Wednesday’s charity gig is called PaulMooners: A Fullmooners Moontacular and co-stars Terry Alderton, Ed Byrne, Jason Byrne, Phill Jupius, Lady Carol, Glenn Wool – and John Bishop coming specially up from London for his only appearance at this year’s Fringe. Plus other names to be announced.

Why would they all appear on a Fullmooners show re-named PaulMooners?

Because the show is raising money for Paul Byrne, the highly-respected director of both Tim Fitzhigham’s Fringe show and Andrew Maxwell’s Fringe show. Paul, aged 36, has just discovered he has cancer – Hodgkin’s Lymphoma.

“It was only diagnosed after the first Edinburgh show and we’re all more than a little bit shell-shocked,” Tim told me last night.

Paul Byrne has returned to London to embark on an intense course of chemotherapy. Tickets for next Wednesday’s Paulmooners charity show are £15 and can be bought from all five of the Edinburgh Comedy Festival box offices – Assembly, Gilded Balloon, Just The Tonic, Pleasance and Underbelly.

In the midst of comedy, real human life goes on.