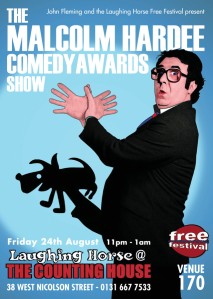 Publicity for the 2012 Hardee annual show

We hope to stage the annual Malcolm Hardee Comedy Awards Show this year, as usual, on the final Friday of the Edinburgh Fringe – 26th August – but not in its normal venue of the Counting House Ballroom.

This is because, today, The Gilded Balloon (a pay-to-enter venue) has ‘poached’ The Counting House venue(s) – including the Pear Tree and Blind Poet – from the Laughing Horse Free Festival and so we are looking for a new venue in which to host both the increasingly prestigious (but now homeless) Malcolm Hardee Comedy Awards and for the daily Grouchy Club.

I am saddened that the Gilded Balloon has taken this decision to poach three free venues. In a blog chat with me in 2012, Gilded Balloon venue runner Karen Koren said: 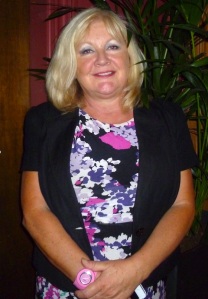 “I did have another venue called The Counting House at the beginning of the 1990s. I named it The Counting House because that’s where they counted the money above the Pear Tree pub and that was around the time I gave up my full-time position as the PA to the Norwegian Consul-General in Edinburgh.”

But that link with The Counting House was over twenty years ago.

It in no way mitigates this new cynical and amoral move – that the Gilded Balloon has intentionally ‘stolen’ three existing venues painstakingly built-up over the last nine years by the Laughing Horse Free Festival – rather than find and build-up a profile for a new venue of its own.

It is a cynical and amoral move that is in no way in the spirit of the Fringe. And it echoes last year’s unforgivably venal and vicious move by the PBH Free Fringe in knowingly financially fucking-over acts in the Cowgatehead venue dispute. (Copious blogs about it last year.)

Ironically, when the shit hit the fans of Cowgatehead last year, it was the Laughing Horse Free Festival, Bob Slayers’ Heroes venues, Just The Tonic and The Pleasance pay venue who helped out the suddenly homeless acts.

Now The Gilded Balloon has shat on the Laughing Horse’s Free Festival and the acts already booked into the Counting House, the Pear Tree and the Blind Poet.

As far as I am aware, the Gilded Balloon’s tenure during the Edinburgh Fringe at its Teviot building is still renewed on a year-by-year basis, so what they have done logically means that they could have no objection if other operators put in higher bids for the Teviot building at the 2017, 2018 etc Fringes.

Once you start shitting on people and fucking-over the spirit of the Fringe, the consequences can be incalculable.