Kate Copstick in Kenya – an autopsy, corruption, de-worming and digging

Last week, I posted a blog about comedy critic Kate Copstick, currently in Kenya, where her Mama Biashara charity works.

Here are further edited extracts from her current diary: 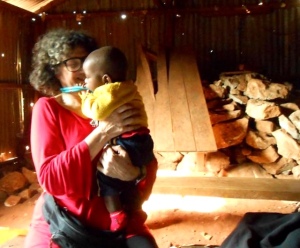 Kate Copstick working for her Mama Biashara charity in Kenya

I have time to talk with Felista about some of the problems the Awendo (strictly speaking I think many of them come from Kisumu) are causing. Apart from the rapist teachers, the sex crazed teens who refuse to wear knickers and the hopelessly infested heads (ringworm) and guts (worms), there is a group of boys who used to keep escaping to go swimming with one of the teachers.

One young lad was excluded from the fun because he was not very well. So he got out on his own one night and dived in. And didn’t come out.

When the body was discovered and the parents informed, they were of course:

(a) distraught at the death of their son and

(b) delighted at the possibility of making some money out of it.

They declared the boy had been beaten at DECIP (the children’s home Felista created and runs) – beaten in the water, which is why he drowned. They got 20,000 from somewhere and demanded an autopsy. No payment, no autopsy here.

Felista had just got back from watching it.

The ‘accused’ and the ‘accusers’ WATCH the autopsy procedure.

“He had a saw and he Bzzzzzzzzz,’” says Felista, doing rather a good impression of taking the top of a head off. “Then…” – She mimes lifting the skull away – “he says This is the brain. Have you ever seen a brain? And then he says: Look! Look! Is there any injury? No”. And then he says…” – Felista mimes pulling the skin away from the skull – “Look! Look! These are the eyes! Can you see any injury? No!”

She mimes the entire post mortem with some enthusiasm. The Y-shaped incision… the cracking of the ribs… looking at the heart and liver… looking at the water in the lungs…

Felista is out somewhere but I pack what I have for her into some boxes and David and I head for DECIP. There is SO much work being done on the slum roads around this area. Nice tarmac roads for the nice people they hope will come and live in the massive apartment blocks that are being thrown up all over the place.

Throwing up massive apartment blocks is the Kenyan politicians’ money-laundering method of choice. They just sweep the poor off the place like they are dust. Their houses demolished; their shops bulldozed. Almost the whole of a little slum village called Mutego has gone. The big stone built church remains. Natch.

I totally bottle-out of doing the sex talk for the randy Luo teens. I will bring Doris and she can do it. I am not sure I could keep a straight face while advising girls not to have sex. A bit like Oliver Reed lecturing on the evils of alcohol.

We go to a (literally) rust brown village beside the bypass near Kikkuyu, park up, open the boot and start. By the time it is beginning to get dark, we have dewormed 350. Oh yes. 350 people. We have given out cough syrups and cod liver oil (each child gets a fish oil capsule with the dewormers – Thank you HTC), gallons of diclofenac gel and mini mountains of pain killers, glucosamine and antifungal ointment. I wipe pus, poke at scabs, palpate lumps and distended abdomens and stem a tidal wave of acid stomach… Generally all good stuff.

The people for whom I do not have the meds are told to come back tomorrow – A lady with tonsils like red and white rugby balls, several urinary tract infections, some diarrhea and an equal amount of constipation. (“My pupu hard, like a goat”)

There is one recurring problem: women with pain around the waist area and numbness in the legs. I am no chiropracter, but a lot of the ladies carry massive bundles of firewood on their backs, anchored with a sash around their forehead. So squished vertebrae and squashed discs are not exactly surprising. They are all going to stretch and slap on the diclofenac gel and see if there is any improvement.

Julius arrives first and we go over the massage training… Most of Cheptulu and surrounding area suffers from whole body soreness and a massage really fixes them till the next load of firewood or water has to be carried.

He is also keen that I reconsider building the well. If the soil is loam all the way down, we could just about afford it.

But, if we hit rock, then the costs skyrocket. Plus we don’t have a water diviner. Snigger ye not.

I saw it work when we dug the well in Juja. I am considering asking if I can borrow the rods.

We arrange massage training for Friday as soon as I arrive and then medical Saturday (with massage) and, hopefully, Raincatcher-making on Sunday. Unless I get the rods…

Now, back to the Education Project. This is bigger than Mama Biashara has ever attempted and it is looking good.

Better still, it is possible because of a Mama Biashara business.

Around four years ago, Mama B met with a group of chokora (street boys) who wanted a grant for a printing business. There was something great about them, so they got it and the business started.

They got a great place in town, business was booming and, every month, these guys would take four boys from the streets and train them in graphic design, print and computer skills. Every one of these boys is employed. Most of them by the big print companies. But now the big companies are getting irritated by the amount of business our guys are getting and are starting to make life difficult for them.

So our guys have moved and work at night and underground (not literally).

Added to this, one of them is standing as a candidate for the local county elections – for the little people. It is SO exciting.

So now, back to the project again.

They are printing, at cost price, 2,000 posters and 20,000 flyers which will go across the whole of Kenya. I have written the content of the flyers and posters.

In 2013, the Basic Education Act was passed, making all basic education free in government schools. However, what is happening – because greed and corruption is a way of life here – is that head teachers and even class teachers create so-called Registration Fees, cooking fees, cleaning fees, standing-up fees, sitting-down fees etc. And, if the children fail to come up with the money, they are sent home from school.

So this leaflet explains (with quotes from the Act and the Constitution) that this is illegal. It is a crime. As is the levying of Examination Fees (as of last year).

People have gone crazy for these leaflets. They have already been translated into 20 tribal languages and are heading to all corners of Kenya. The people in Turkana want big posters to put on their camels and stuff has already gone to Narok for the Maasai. As I type, the nine languages spoken by the Mijikenda on the coast are being typed up. It is really rather exciting.

And our candidate – whose name is Timothy but who is known as NJuguna Wa Keja – is using this as part of his platform.

Their slogan is “Giving a  hand up. Not a hand out.”

No-one takes any salary from Mama Biashara and Kate Copstick covers 100% of her own expenses herself. She takes no money from the charity nor from any donations to the charity. 100% of all money donated is spent on the charity’s projects.

Donations to the charity can be made HERE.

One response to “Kate Copstick in Kenya – an autopsy, corruption, de-worming and digging”