So, last night was the first Strip Light show at London’s Museum of Comedy.

“Yes. Tamara Cowan, who runs the Musical Comedy Awards, and I decided to set up a production arm together – Strip Light Productions. And the Strip Light show is a monthly night at the Museum of Comedy every first Thursday until August, when we go up to the Edinburgh Fringe.”

“Yes. Live production company. We are interested in developing acts that could tour. We felt there was a bit of a gap in the market for acts that maybe aren’t quite so straight stand-uppy and for people who want to do more interesting concept nights and make them into something bigger.”

“And, separate from that,” I said, “you’re involved in The Comedy Project.”

“Yes. Starting on Monday and every Monday for a month there are Comedy Project shows at the Soho Theatre. It’s a separate thing. It’s not part of Strip Light or Ebdon Management. The Comedy Project has been going longer even than I have been working. It was started by actress/comedy writer Rosalind Adler in the late 1990s and has continuously pushed through loads of great new comedy writing.”

“So just the same thing year after year?” I asked. 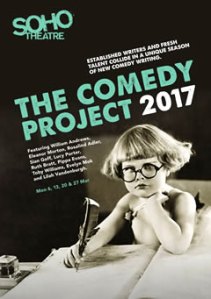 Not the same annual thing: it has evolved

“No. It’s sort of evolved. There was a time when judges came in to give feedback, but the acts were kind of uncomfortable with that.”

“It was a competition?” I asked.

“No. But I think it maybe felt a bit confrontational getting feedback in a room with an audience.”

“So you run it with Rosalind Adler?”

“The last couple of years we’ve been doing it together.”

“It doesn’t matter, really,” Hollie told me. “It’s a balancing thing. It’s the mixture of the scripts and how they sit together. We don’t want to put anything too similar on together. We want acts that will complement each other tonally. So something surreal might sit next to something that could be a big BBC1 sitcom.”

“The object,” said Hollie, “is to get the scripts seen by industry people who might take an option on one of them… to present the writers to commissioners – so they can learn who they are before they are pitched to them. And for the acts to be able to hear their scripts performed. They get so much feedback and they can really see what’s working.”

“They are all your clients?” I asked.

“No. Only three are my clients. We do a big shout-out to other agents and lots of other comedy writers.”

“Why are you,” I asked, “a presumably hard-headed agent, touting the work of other agents’ clients? – You can’t make any money out of them.”

“But,” I said, “if Fred Bloggs, a writer or actor from another agency gets a break from this, you get nowt.”

“You could always nick someone else’s clients,” I suggested.

“I think my eyes are good enough to pick out the best talent without having to take it off anybody else. I have a little bit of a spine left, despite being an agent, so I try my best.”

“Nobody starts as a money-maker. You do have to put the time in. Things don’t happen overnight.”

“How did you become an agent?”

“The agency has been going just over 2 years. I used to work in TV production as a runner and was going up to co-ordinator level, but then I got the hump because I wanted to be a producer and I didn’t feel I was being pushed in that direction.”

“You go for the quirky end of the market,” I suggested.

“Not on purpose. I don’t feel like that. And I don’t like the word quirky. They’re just different; more interesting; unique voices.” 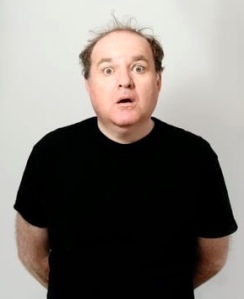 “Anyone who wins the increasingly prestigious Malcolm Hardee Award is quirky.” I suggested. “You have Ed Aczel.”

“But he’s so inspiring,” said Hollie. “Everybody I ever put him in front of says: I don’t know what I’m going to do with him, but I want him. He gets cast in great films, Call The Midwife, whatever.”

“Are your parents in showbiz?” I asked.

“He has loads of money, then,” I laughed. “There’s more money in plumbing than most showbiz.”

“He only recently retrained in his 50s,” said Hollie. “Before that, he used to work in a print finishers in Hackney where, essentially, you cut up flyers. He’s happy now. Everyone needs a plumber.”