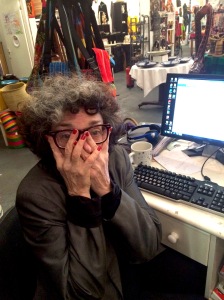 In two days’ time, Kate Copstick returns from Kenya, where she has been working for her Mama Biashara charity, which was started to give advice and small amounts of money to poor people (mostly women) so they can support themselves by starting small self-sustaining businesses.

The charity’s work has widened to try to lessen other social problems, as shown in previous blogs and, here, in edited extracts from her diary, we catch up with a little of what she was doing last week, continuing from a previous blog… 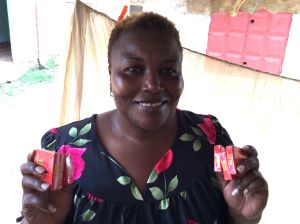 I get a call to say that the Meru groups are all moving today to Garissa under the watchful eye of Vicky. For those who did not read the Meru diary, these are twenty women who are escaping their rapist, paedophile husbands who have been sexually abusing their own children. So the twenty women and about ninety children are simply disappearing from their appalling life today and starting another life in another place. The women will form a little community and everyone is part of one of the group businesses. There is a hospital waiting to look at physical damage and a counsellor to address the psychological trauma. Vicky is working on a school for the kids.

Doris calls from Limuru, where the bravest five of the girls who have been being kept as sort of house/sex slaves are leaving for their new lives. Some have children born of the abuse they have suffered. Most of them were brought to Nairobi aged about eight or nine. The sexual abuse started at the latest, six months later and has continued unabated ever since. They have rarely been allowed out of the house to mix with other people. So this rescue has been tricky.

But now they are going.

They all have someone waiting for them – a Mama Biashara person – and a place to stay, well paid, nice work and three days training each week in skills like hairdressing and sewing. These young women have been so abused for so long that we could not have given them their own businesses. They have no confidence, no skills and almost need looking after like children until they can heal a bit and find themselves again. Which they will. Doris has excelled herself here.

The rest of the girls in this group are too terrified to come along. And they have difficulty (which often happens) in believing that someone actually wants to help them. But we are staying in touch.

Helper Felista works hard for Mama Biashara all over Kenya

We have had great difficulty in keeping in contact with the Maasai girls in Shompole. I do some research and find it is not “there, above Meru” but over, again, towards the Tanzanian border between Lake Magadi and Lake Nacron. Not, in the grand, Kenya scheme of things, far.

I resolve to go on Saturday and come back Sunday or Monday. It turns out Shompole is quite the tourist trap. It is hotching with safari operators, camps, ‘wilderness experiences’, ‘cultural exchanges’ and the rest. I see pictures of jolly Maasai ladies engaging with eager tourists. I am assuming that the old ‘cultural exchanges’ do not include female tourists being held screaming while they are cored like a pineapple and then sewn up with parcel twine (which is what happens in the local version of female genital mutilation).

I get a call from Felista who is sounding not at all well. I was supposed to meet her to give her some money for some lengths of pipe for the sewage system at the home. She had explained earlier: “The pipe which is here is very small and the poo-poos are now very big and they are blocking, blocking and returning into the cho”.

I find her slumped on a bench in a pharmacy.

She has a pain in her chest which sounds like heartburn. But she seems very weak (unusual). The pharmacist has given her Omeprazole.

“IT is a PPI (a proton-pump inhibitor),” I hoot. “These are serious drugs and you cannot hand them out like sweeties”.

“What do you give for a headache?” I mutter. “Morphine?”

In an hour, Felista is not fine. And the pain has shifted to her back.

I ask the PPI King if he has a blood pressure meter. He has. Felista’s blood pressure is high: 177/104. But no shortness of breath, no clamminess, no racing or thready pulse.

I chat to the PPI King about likely antibiotics for the girls in Shompole. He does not seem that bothered by my description of the problem.

“That is the Maasai. That is what they do,” he nods.

I get Augmentin in high doses, iodine, hydrogen peroxide (for when it is time for the maggots to go) and take Felista next door to drink tea. She is not perking up that much, so I put her in a taxi. Sadly the cost of a wee ECG here is ridiculous. But I might see if we have any pullable strings. 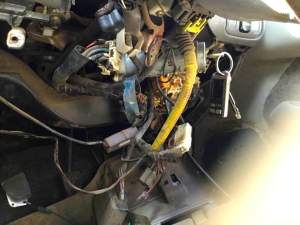 High tech under the dashboard of the Mama Biashara car

David and I eat peas and rice in the little place downstairs and go to the car. Which has apparently died. Completely. Not a flicker. The usual rearranging of cardboard bits on the battery and banging the contacts with a spanner do not work. A mechanic is called. An hour and a half later, the car comes back to life.

“It is a fuse,” pronounces David.

We do a lot of pushing her around the dusty compound while David attempts to start her up.

Another half hour and she is going again.

“Doris is again working her magic…”

More sexually abused girls from the forest community outside Limuru have come forward. Seven of them; four with babies.

In a slight twist to the usual story, one of them was brought to Nairobi aged twelve, by her older sister. It is her sister’s husband who has been raping her ever since and it is his baby she has.

Doris is again working her magic within the Mama Biashara community and has found the seven girls places with our Glam customers. Accommodation, food and very well paid house work plus, in all cases, the all-important training. In one case the Glam lady has four shops and is looking to train our refugee girls for all of them.

The feedback about the girls who left last week for their new homes is very positive. The host ladies are delighted and the girls are thrilled. We may have discovered a whole new way of dealing with sexually abused teens. FYI all of the groups will be getting counselling: that is part of the package we set up.

It occurred to me that some of you might see the whole child rape/sexual abuse/FGM thing as being Mama Biashara ‘spreading herself too thin’.

Let me explain how and why this is working.

At the moment, about 75% of Mama Biashara’s income comes from the London shop. Currently the shop is breaking me. And I have no real idea for how much longer it is viable. The problems are both personal and personnel.

I have to find a way to make Mama Biashara more attractive to funding bodies/fundraisers/donors. This means being (I have been advised) much more specific. Very few people are wonderful enough to give money to give away to people to change their lives through setting up a small business. Apparently that is too ‘vague’.

Serendipitously, the whole child rape project reared its ugly head. The day we put our feelers out on the ground to see what was lurking there, it turned into the Hydra. The women whose husbands were raping their children but who could not leave… the sex slave girls… and even Maasai women who were prepared to run from their clan to save their daughters from FGM are now Mama’s constituency. They are all being saved the Mama Biashara way – by being made strong and independent by having their own, sustainable businesses.

And now I am hoping that we are more eligible for grants.

I have admitted defeat on the ‘just do the right thing’ front.

I have to continue doing the right thing but be prepared to parcel it up the way the trusts/donors/fundraisers want to see it.

Now we have a bigger job adding on counselling, medical care and relocation expenses. Girls will get training (as the sex slave girls did) and Maasai girls will get the education they have been refused (there is a small school at the centre in Rombo). But it is still all the Mama Biashara Way.

We still have our groups in Awendo (hotbed of all things non-consensual and unnatural where sex is concerned, Western and the Coast. As well as the new communities growing in Dodoma (in Tanzania – we are literally an international charity!), Nanyuki, Garissa and the rest.

Mama Biashara exists solely on donations and from sales at its London shop. Copstick takes no money for herself in any way. 100% of donations and of the shop’s earnings go to the charity’s work.

You can donate HERE.