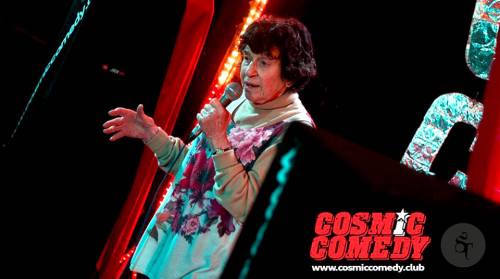 In the past few weeks, globetrotting UK-based American comic Lynn Ruth Miller – physical age 84; mental age 24 – has sent me pieces about her trips to Prague and Dublin.

Next week, she has a week of performances in Paris. But last week, she was in Berlin for six days.

This is (some of) what happened…

The Ryanair flight was ONE HOUR late landing, so we didn’t get the bugle call to tell us we were on time but my hearing aid gave me a little whistle which was much nicer and didn’t disturb anyone else.

I had made friends with a lovely break dancer who was telling me how he had mutilated his body and had even begun losing his hair because of the extreme physical demands of his profession and I thought to myself: “It is a good thing I only do the Lindy Hop half time. I certainly cannot afford to lose any more hair than I already have.”

Bald is only beautiful on a baby’s butt and I am definitely beyond that.

I think, in a strange way, Berlin is very much like Brighton (although Brighton is wildly expensive and Berlin is amazingly affordable). 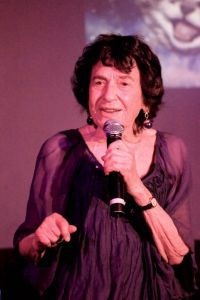 The similarity is that anything goes in both places and everyone loves everyone… no homophobia of any kind. But, although everyone feels at home and loved in both places, it is really hard to earn a living. Everyone has a unique talent they cannot market and they are so dedicated to that talent that they will do it anywhere and everywhere just to have the opportunity to express themselves to others.

No-one needs to pay them for what they do. So you cannot earn a living; you cannot progress in whatever field you happen to be in; and yet… and yet… both are such FUN places to be, everyone hates to leave.

Berlin is a place you need to experience rather than describe. There is an atmosphere of politeness and concern that is really comforting. It has been one of the most welcoming of places for me with people anxious and eager to help. I often wonder what happened to this national sensibility when my ancestors were here being converted into soap and lampshades.

We run away from our roots, don’t we? I certainly have: across a vast country, across an ocean. And the strange truth is that the clarification and validation I sought was inside me all that time.

That first evening in Berlin last week, I was intending to meet Kenny (a guitarist I met last trip) to go open air dancing but – alas – he was too tired (story of my life).

Instead, we took a little walk and talked about him. He is finding the glow that is Berlin fading and he is thinking about finding vibrancy somewhere else. The low cost of living and wonderfully hopeful atmosphere is tarnished. Kenny has been here 11 years. The problem of living in a low cost area is that salaries are also low, so no-one can get his or her head above water.

The second night – Wednesday – I was blessed with a comp ticket to Quatsch Comedy, THE upscale comedy club that does one English show every couple of months. The MC is Christian Schulte-Loh who is amazing because, although English is his second language, he has the English subtext down pat. He is an excellent host, never dominating the stage and always priming the audience for what is to come, welcoming them and getting them set up for laughter.

The headliner was John Moloney and I was amazed and delighted at his ability to give us one punch-line after another, never slowing his pace and never descending to cheap shocking material. He is an artist and he is the reason I struggle to perfect my set… What he does is where I want to be (before I die? Fat chance). The entire show taught me that I have a long way to go to be that smooth and that professional.

After the show, I went to Bombay – an Indian restaurant across the street – to have dinner and met two vegan women from Amsterdam who were in Berlin for a conference that was cancelled. Both are writing a vegan cookbook. The son of the owner of the restaurant fell in love with all three of us and plied us with shots until we were all bloopy. Evidently alcohol is fine on a vegan diet.  It is just cheese and eggs that are verboten.

“I am more than an old lady to them…”

Thursday was my first night at Cosmic Comedy and it was a delight. The audience is receptive and happy, filled as they are with pizza and free shots. I truly love doing my sets there because the owners and the audience always get my humor. I am more than an old lady to them. I am a funny comedian. Eat your heart out Joan Rivers. I didn’t have to have a face lift to do this.

Friday night was a showcase night and I headlined. The audience was small because of the Big Game (football over here is a way of life) but they were responsive and I did my usual routine. The interesting thing was that usually my audiences in Berlin are all expats, but this time the majority was German. English is their second and sometimes their third language. They got the jokes all right but slowly.

This highlights my theory that standup comedy is a skill that is far more than the jokes you tell. You are paid to make the audience laugh no matter what the demographic. That means adjusting your material to their response. Not easy, but definitely part of the job.

Saturday was my big show and I did one of my compilations of songs and stories. My friend Kenny Stanger accompanied me on a guitar. Since I cannot carry a tune anyway, it really doesn’t matter what the musician accompanying me plays.

When I looked at the list of musical numbers I realized that nine out of the ten were about my looking for love, loving men, wanting to find a guy and bemoaning my obvious failures. I was fairly sure this topic would be boring and out of date for the modern expat generation in progressive Berlin, but I was wrong. Even though I did my usual stumbling over words, tunes and melodies, the audiences was captivated and simply could not get enough of me. The show was a great success.

They clustered around me after the show just to assure themselves that all the stories I tell of my failed attempt at romance were really true (as they are) and several said they had never seen a show like this one and of course they were right. No-one in the world has stumbled and fallen so indecorously or made such a mess of a performance. I suspect the charm of this performance was that everyone thought: “If that old hag can make a fool of herself on stage, I would be a star.”