In recent blogs, 85-year-old London-based American comic Lynn Ruth Miller has been sharing her experience of performing in exotic places like Hanoi. Recently, she was closer to home…

I really love the Leicester Comedy Festival because it does not cost an arm and a leg for me to participate. I have already lost a hip and a knee and I am in no mood to barter with any more body parts.

Before Leicester, I had to convince a promoter or a venue that, if I pay lots of money, they will give me space to perform for an hour.

Not any more. No sir.

Now, I have a venue that wants ME.

OK, so it’s not a fancy one. It doesn’t even have a stage. There are no bright lights and no-one ever reviews shows that appear there. But it is my little venue and I love it just as much as the big showy ones that make the headlines and get the reviews.

Bike shop: “a wonderful place for me to shine.”

It is a bike shop.

Things could be worse. I could be crammed into a refuse shelter among all the flotsam and jetsam which people recycle. I could even stand on top of an automobile in a showroom or fight my way to the top of a chest of drawers in an antique shop.

But my bike shop is a wonderful place for me to shine.

Bicycle people are not judgmental. They all love to laugh. It was bike enthusiast and promoter Andy Salkeld who figured that out. He got the idea of transforming a commercial establishment into a comedy performance space several years ago because he wanted to amuse a healthy, outdoorsy type of audience.

Though, sadly, that is not me.

I am so uncoordinated that, the last time I tried to pedal my way to the grocery store, I mistook the hand brake for a horn and somersaulted into an intersection.

Andy is the Cycling Co-ordinator for Leicester City Council. (Yes. They really have someone like that, right up there with Public Safety, Public Health and Emergency Planning.)

Andy has created a bicycle comedy show – The Red Light Comedy Club – that has been part of the festival for several years. The challenge for Andy was to find someone who had nothing better to do than host his unusual shows. Any performer already creating his own production at that festival would never risk dampening his reputation by standing among a lot of axles, chains and rubber tyres.

Andy Salkeld “has a unique taste in comedy”

I was that someone.

What else do I have to do but take my medication, attend my dialysis and locate my dentures?

Andy has booked me to host his Red Light events for the past three years. And I love every ego-boosting moment.

He has a unique taste in comedy. In the years I have hosted these shows, there have been comedians who sing wild, improbable songs, those who throw things at the audience and those who insist the audience throw things back at them. The events are unique and don’t involve deep thought, but there are all those different bicycles to look at if the person at the microphone does not appeal.

This year, I met some very unusual people who revealed things about themselves on stage that I would not even tell my proctologist, much less my mother.

For example, Kevin Hudson, an accountant by day and observer of the idiosyncrasies of life by night, went into great detail about his prostate examination. His account was so graphic I thought we might get a hands-on demonstration but, sadly for me, he kept his trousers on. It has been a long time since I have viewed that area of the male anatomy and I kept hoping…

The most interesting part of that evening was meeting an accomplished comedian who is 75 years younger than I am. Ian Hall who introduced us to the real star of the show: his daughter, Niamh Hall. She is ten years old. She manned the audio for her father and stole the show. 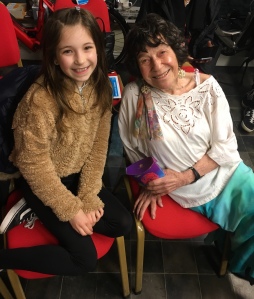 Niamh Hall (left) was “the real star of the show”

But that is what happens when you let a real woman take over, isn’t it?

I realized then how limited my own upbringing was.

When I was ten, my main activity was bouncing a ball (rubber… not what you are thinking;  that didn’t happen until I was sixteen) and stroking furry creatures (FOUR legged ones).

I certainly did not have the courage to stand on a stage with a bunch of strangers staring at me, while I took charge of my father.

It is a new world and Niamh is a shining example.

I see her, when she is my age, appearing  at the O2, her tattoos crumbled into a kaleidoscope of unidentifiable colors, her confidence mesmerizing an audience amazed at her ability to balance on one leg while she operates ten turntables filling the room with musical cacophony.

She will be able to do a thing like that until she is 100.  Unfortunately, all I can do is talk dirty to young people.

I was sorry to see the festival end. It was an education for me this year and I cannot wait to return to the bike shop again next year to find out why Viagra is such a success. I have always avoided it because it squanders four hours of your day. I don’t have that much time left to waste. Not anymore.