Jimmy Savile comedy duo banned from Norwich pub. Now they plan an opera based on a murder maniac rampage… 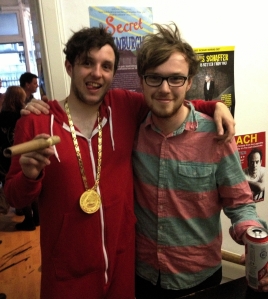 At the Edinburgh Fringe in August, comedy duo Ellis & Rose got more than a little attention by performing Jimmy Savile: The Punch & Judy Show.

The other reviews were… equally interesting. The London Is Funny comedy website gave the show 1-star as “a steaming pile of horse shit”. Slightly better was The Skinny, which gave it 3-stars and said it was “good, knockabout fun done in a deliberately half-arsed way” and Outsider Comedy gave it 5-stars and said it was “a new style of comedy that is years ahead of its time”.

They won a highly-coveted Malcolm Hardee Comedy Award at the Fringe when a member of the public hit Ellis in the face in the street and gave him a massive black eye for daring to perform Jimmy Savile: The Punch & Judy Show.

Well, they didn’t get the Award for that.

They got it when it was revealed in this blog that, in fact, it was a publicity stunt and Rose had repeatedly punched his comedy partner Ellis full-force in the face to get the required effect… all to publicise their show. They even videoed the beating and posted it on YouTube:

They know how to milk a show for publicity. So it came as no surprise to get a message from Ellis yesterday. It said: 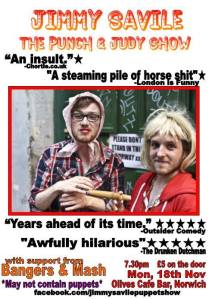 Not normal even for Norwich – the poster

We are putting Jimmy Savile: The Punch & Judy Show on in Norwich for one night (next Monday 18th November) before we hit The Brixton Dogstar in London with it on the 28th. We had arranged a lovely Norwich venue, which was to be the Hog in Armour pub and we sent out all the listings information.

The day after that, I got a phone call from the manager telling me the pub owners had reacted badly to having a Jimmy Savile show in their venue – and could we change the title? If not, they told us, we would have to cancel.

The owners of the pub apparently also own a family holiday park and didn’t want Jimmy Savile in their pub and – of course – they wrongly thought that something called Jimmy Savile: The Punch & Judy Show is somehow going to be totally pro-Savile…

I suggested we change the title to Sir Uncle Jim’s Unwanted Spitroast, which didn’t go down well… but then it never does.

They said the show would have to be cancelled. I said OK. But I am not one to give up in the face of adversity so, the very same day, I made a lot of phone calls and arranged a new venue – Now we are going to perform the show in a lovely place called Olives Cafe Bar, who are very supportive of us and our Jimmy.

I have no idea if any of the above is true.

But, in Edinburgh, I saw Ellis’ very painful black eye and it never entered my head that he had been beaten up by his comedy partner. They know how to drum up shock and publicity.

Now to the future… 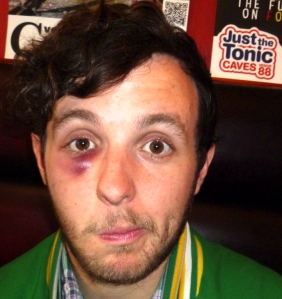 Could Ellis be cruising for another bruising: a real one?

For readers who do not live in the UK, in 2010, a man recently released from prison – Raoul Moat – shot his ex-girlfriend, her new boyfriend and a policeman using a sawn-off shotgun.

The new boyfriend was killed, the ex-girlfriend wounded and the policeman permanently blinded. Moat then went on the run for six days and, when cornered by police for six hours, eventually shot himself.

Two years later, the blinded policeman was found hanged at his home.

On Ellis’ Facebook page, there is currently a posting which says:

Turning the Raoul Moat Saga into an opera. Need a composer to do the music. Anyone?… Raoul Moat really is a great name for the tragic protagonist of an opera… Don Giovanni, Figaro, Raoul Moat…