Edinburgh Fringe: an audience member urinates on a bag – & other extreme acts

Thoughts of horses and fish tails perplex me

I woke at 6.10am this morning, dreaming of a horse with a fish tail.

My brain had not yet worked how the fish tail was physically connected to the horse.

I have no idea how this connects to events at the Edinburgh Fringe. Perhaps in its lack of any context or normal concepts of common sense. Odd things seem normal in August in Edinburgh.

Yesterday afternoon, I went to see Ian Fox’s show The Unsearchables – a ridiculously enjoyable hotch potch of bizarre photos and facts which you CANNOT find by searching on Google… in the format of an audience involvement gameshow.

It did not seem strange that someone in the audience said they knew a couple who had named all of their five sons Mark. No other forenames. All five were called Mark. And American comedian Spring Day (her real name), who lives in Japan, said that one line she wished she had never heard was when she was having an operation in a Tokyo hospital where they did not realise she understood Japanese. As the anaesthetist injected Spring just before she was about to be cut open, he said: I wonder if this will be enough? 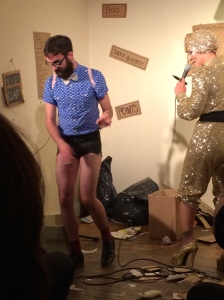 Yesterday evening, I saw the Miss Behave Gameshow which involves a lovely male assistant called Harriet and which climaxed with the audience winner going into the street outside Bob & Miss Behave’s Bookshop and smashing a mobile phone to bits with a mallet.

This is a perfectly acceptable and normal thing to see on an Edinburgh street in August.

But are there any limits to what anyone can say or do at the Fringe?

“My boundaries for what is unacceptable in comedy are pretty low. I didn’t even know I had any. The only time I have ever felt like walking out when someone told a joke that I felt was totally unacceptable was maybe 20 years ago, when I was working with Bobby Davro and I was trapped in a studio with him. One of his jokes was What turns fruit into vegetables?… AIDs.”

“I think it was because,” Copstick replied, “at the time, I had quite a lot of friends who were nearing the vegetative state. But, since then, I’ve not seen anything at all where I thought: Mmm. That’s not really on.”

Rumour has it some thought a line was crossed at Bob & Miss Behave’s Bookshop a couple of nights ago when, during the late night (00.20am) show, a member of the public came in with a Just For Laughs bag and (the details I have heard are a bit hazy, depending on who tells me) somehow this eventually ended (after encouragement from Bob Slayer) with the lady urinating on her own bag on the floor.

As a result, there was a philosophical falling-out between a couple of the other hosts and Bob Slayer about what was acceptable and unacceptable.

I bumped into comedian Alexander Bennett in the street yesterday. He knew someone who was there during the incident.

“I think pretty much anything is acceptable,” I said. 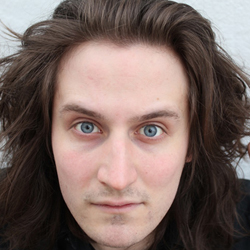 Alexander Bennett: the face of a self fire starter…

“I’m all for gross-out stuff. I like the reaction. The Euuaaaghhh! reaction is very close to Ha-ha-ha… But pissing on the floor at the Bookshop… Who is suffering there? It’s kind of the venue.”

“It is Bob’s venue, though,” I said. “His gaff; his rules. He’s the one who has to clean up afterwards.”

Alexander replied: “I remember Sean Lock telling a story years ago about Johnny Vegas vomiting while he was doing his pottery and making a vase out of the vomit and puke. I think you can make anything work if the circumstances are right. The only thing to consider is Who is the victim?”

“You could get a lot of money now for a Johnny Vegas puke vase,” I suggested. “Last night comedy harpist Ursula Burns told me her local church was trying to sell her scrapings from St Someone’s bones.”

Could grains of the Real Malcolm inspire young comedians?

“Well,” said Alexander, “there’s a massive relic industry all over the world selling shavings of the saints.”

“The increasingly prestigious Malcolm Hardee was cremated,” I said. “Perhaps we should start selling Grains of Malcolm Hardee to up-and-coming comedians.”

“Malcolm Hardee was burned?” asked Alexander. “I bet he went up fucking quickly. All that alcohol. I have always wanted to set myself on fire on stage. I want to sing Sweet Caroline and set myself on fire. There’s a bit in the lyrics about getting warm.”

“What about singing The Doors’ Light My Fire?” I asked.

“There is no art,” said Alexander, “in setting yourself on fire to a song that contains fire in the lyrics. There’s no art to that. I want to build up some romantic thing with an audience member and then have them set me on fire. I would then sing Sweet Caroline and fall backwards into a swimming pool. I like the idea of stunts being part of comedy shows. It’s that improv thing. I could set myself on fire, then get Bob Slayer to piss on me to put out the flames.”

“Too much alcohol in his blood, too,” I said. “It would be like a reverse flame thrower.”

Later, in the basement of Bob & Miss Behave’s Bookshop, I heard why the audience member had been encouraged to piss on her Just For Laughs bag a couple of nights ago.

One of the wonderful acts at Bob & Miss Behave’s Bookshop is Stompy aka The Half Naked Chef aka Richard Stamp. (There is a video of him on YouTube)

The entrance to Stompy’s amazing maze

“Two years ago, my company DotComedy took our maze Get Lost! to Montreal (where the Just For Laughs Comedy Festival is held). It’s an outdoor show with a 20 metre square maze with 13 performers in it. Interactive. Comedy. Fairy tale like. We did well – there were 2,000 people a day coming through the show.

“We talked about bringing the show back the next year. Just For Laughs said they couldn’t afford it. Fair enough. But then they said: We’re going to make our own one.

“So I said: OK. That sounds fair enough.

“Last year, I didn’t have any friends who went to Just For Laughs, so I heard nothing more.

A pensive Stompy by the Bookshop’s toilets

“This year, friends of mine started sending me pictures of this maze that’s been made. The copy is very similar. Obviously, I haven’t got the copyright on mazes. That was probably a feller in Crete. But the thing is the content of their maze is really similar to mine.”

“Well,” said Stumpy, “they use a sort of card game to go round the maze. They have this spider web area. So I got in touch with them about it. I was pretty upset. I put stuff on Facebook and it got around and lots of people joined in.

“I was very annoyed with them. So then Just For Laughs got very annoyed with me and they have lots and lots of lawyers. So, a couple of weeks ago, they sent a letter to me saying they are going to sue me for Defamation of Character.”

“Can a company have a character?” I asked. “Maybe in Canada.”

“In Quebec,” said Stumpy. “Montreal. I just don’t want to go through the legal… About ten years ago, they ripped-off one of my other shows called The Misinformation Tent. They should call themselves Just For Lawyers.””

“I suggested: “The publicity you get and the bad publicity they would get… They would be damaging their own reputation far more than you ever could.”

Of such things, are Edinburgh Fringe incidents made. Like a woman pissing on a Just For Laughs bag in Bob & Miss Behave’s Bookshop in a late-night show.