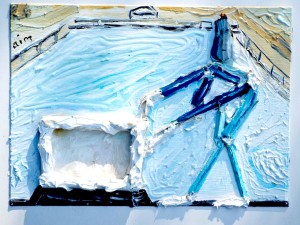 So, in the last two days, I have received 10 e-mails and currently 22 JPEGs of paintings of blocks of ice from my speciality act chum The Iceman.

That is his entire act. He has his fans.

“A figure of mythic proportions.” (Independent)

“This inexplicable man.” (The Stage)

The Iceman when he was last (partially) seen in this blog

“My friends are all fans of yours.” (Phill Jupitus)

“Your act is shit!” (Chris Tarrant)

The last time I blogged about The Iceman – two years ago – my piece was headed:

In his 10 new emails, The Iceman suggests I should write a follow-up blog headlined:

“My paintings are getting more sophisticated by the second,” he tells me. “The galleries want me more. You had better purchice a painting before the prices get out of reach? If you don’t like the icethetices, see it as an invicement. My deep art always benicefits from iceposure on your mammoth blog.

“The Iceman,” he continues, “now goes under the name of AIM – Anthony Irvine Man. As usual, my aim is lengthening the life of the original blocks of ice through a parallel transformation in the medium of paint. In the process, dicecovering  a thing of beauty can be made.

“I can’t tell you prices, but they are significeant. You can find all my recent paintings on Twitter -u are a follower!!!? – @Cold02ukIrvine “

Iceman (left) & Laurence (I think) Rundell shake on the deal.

As far as I can fathom from The Iceman’s unique writing style, a man called Laurence bought one of the new Anthony Irvine Man’s paintings at the Topolski Gallery/Bar under Waterloo Bridge in London.

He sent me a photograph.

“The handshake,” he explained, “is an agreement to honour/complete the sale and instead of paying in cash to transfer funds to the Iceman’s bank accice. The Iceman met Topolski (through/with the IceMother & an art appreciator – the IceWoman/IceWife was also there) when it was still his studio.

“The painting was SOLD,” he continued to explain, “but with permission to hang in exhibitions. IM magnifices sunrays to melt block… booked in advance – on hold. Both paintings are based on live performance of live block handling @ Tooting Lido – See vid clip on web sice www.iceblocked.co.uk. Another art critic cfs aim to basquiat & Dubuffet but I aim, am too humbled by that cf to dwell on it.”

So I think that clears things up.

He rounds things off by saying: 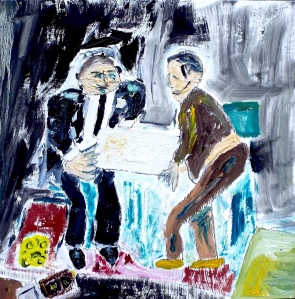 Sometimes, on stage, The Iceman needs some humping help

“Laurence (buyer) is going to send me some text re WHY he has bought the painting, so will forward to you when it comes. Can you spot the ‘snail damage’? It is on the painting of the IM with spray-can on head. It took some water – my garage studio is very damp, being open to the elements – icepropriately.”

The photos of the various paintings in this blog were, I think. taken by Elizabeth Holdsworth of the Royal College of Art but, like much else in The Iceman’s occasional publicity blitzes, this is a tad vague. I find it more intriguing not to investigate further.

I think the newly re-born Anthony Irvine Man would continue to prefer to be seen as an International Man of Micetery.

On YouTube, FYI, he explains his philosophy in 23 seconds:

… and examines his own face in 24 seconds… 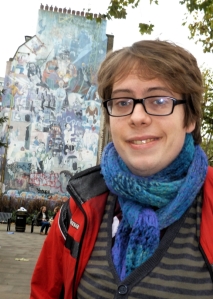 When I talked to comedian Ellis of Ellis & Rose recently, he told me he was going to write Raoul Moat: The Opera about the recent multiple murderer. He told me the music would be written by London-based Dutch comic Jorik Mol.

So, obviously, when Jorik and I had tea in London last week, I asked him:

“How is Raoul Moat: The Opera going?”

“We haven’t met about it so far,” said Jorik.

“Do you intend to meet?”

“And the philosophy of Raoul Moat: The Opera is…”

Jorik is now living back in England again after a break at home in Holland for a couple of years. He is doing a Masters in Comparative Literature at University College, London.

“It sounds impressive,” Jorik told me, “but it just means I will never be able to get a job. I’m doing the Masters full-time; I’m doing extra tutorials; I’m doing translations for UCL; I’m trying to gig three or four times a week; I’m trying to write. This week I gigged five times which is a bad idea on all levels. I do not have a life.”

That was last week. This week Jorik is doing four gigs, including one totally in French tonight at the Comedy Cafe for the International Comedy Club (which is run from Zürich). And, on Thursday, he is performing in Streatham at a benefit for dogs in Romania organised by Danish comedian Sofie Hagen.

“Have you ever gigged for non-humans before?” I asked.

“I’ve gigged before for audiences in Holland that didn’t seem to be human,” replied Jorik.

“I’m writing an essay about Kafka and laughter.”

“I read somewhere,” I said, “that The Trial – which is always billed as the ultimate paranoid novel… Kafka and his friends thought it was phenomenally funny, like a comedy piece.” 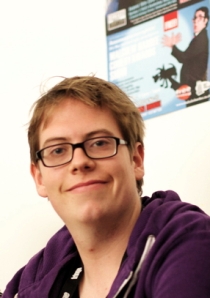 “When a comedian goes on stage,” explained Jorik, “one of the common stupid opening lines is I know what you’re thinking. But that is actually what all comedy is about.

“Comedy is about leading the lines of cognition in a certain way, from a certain perspective. You are resolving issues that shouldn’t be resolved, you are duplicating narratives, you are leading people up the garden path.

“The cognitive system is in the pre-frontal cortex and it’s basically the thing that asks the questions Where? What? Who? Why? How? and Which?

“If that part of the brain – the cognitive system – doesn’t function, it’s very difficult for you to engage with humour in any way, because humour is about asking the questions Where? What? How? and Why? and those questions being subverted, inverted or converted.

“So I’m going to write about the 18th century: Immanuel Kant, Laurence Sterne, Voltaire and a guy from Austria called Johann La Roche who wrote puppetry plays. It was like Commedia dell’arte. People improvised what was happening in the room, in the street, in politics. It was topical jokes – boom boom boom.

“My interest is in joke shapes: the linguistic shapes that textual humour takes. It’s a linguistic notion of doing something or transgressing boundaries on a physical or social level.

“In Britain, it’s normal for people to say He’s a funny guy, She’s a funny girl, You ARE funny – which is bullshit. Being funny – using those joke shapes and tropes – is learnt behaviour.

“I was talking to people in the German Dept at UCL and someone told me: I can’t really say to students – especially First Year undergrads – This is funny, because their capacity to read German is just not good enough yet. Same thing with French. You can’t say This is funny because they’ll go No, it’s not, because they don’t yet fully understand the language.

“I want to look at texts and how they produce comedy. Was it you who wrote you can’t watch five stand-ups in a row because you get exhausted after a while?”

“Possibly,” I said, “I do think that’s one problem with current comedy clubs – you’re just watching stand-ups doing much-the-same thing – just standing there saying words – with no variation whereas, in the 1980s, the stand-up was interspersed with visual variety acts and bizarre acts.”

“Yeah,” agreed Jorik, “like Mr Methane and The Iceman.”

“I want to work with Dr Steve Cross who does Bright Club,” said Jorik. “He works at UCL but is sometimes a stand-up.”

“Coming back here,” said Jorik, “I have to re-establish myself so I have to play the circuit. But I’m really struggling with life-work balance: that’s why I listen to podcasts all the time – to drown out my inner monologue.”

“That’s why you have trouble getting to sleep at night,” I said.

“Yeah,” said Jorik. “That’s why I need the mirtazapine. I find it very difficult, because my mind’s racing constantly. The first month I was here in London was rough as fuck. I’d basically been waiting to come back to Britain for two years and I’m the kind of person who wants everything done straight away and that just doesn’t work over here. It took me six weeks just to register with a GP.”

“Your persona on stage is not anxious,” I said.

“Yes, it’s quite friendly,” said Jorik, “and sweet and flirty but occasionally bitchy. When I was 20, I wanted to be an angry comic, but I’m the opposite of an angry comic on stage. It’s weird. I feel I have been lowered down into this persona and, with age – I’m 25 and have been performing since I was 17 – I’m only starting to get away with it now.”

“You may have already peaked,” I joked.

“Yeah,” laughed Jorik. “It can only go downhill from now! I’ve always felt like that. I wake up like that every morning. When I was 4, I read a book about Mozart and that he had composed his first symphony at the age of 3 and my brain shouted out: YOU’VE LOST!

“It’s unlikely I’m ever going to achieve anything in comedy. There are so many people doing comedy right now. It doesn’t matter how original you are. It does not even how matter how good you are. You will not succeed. Success is only what other people talk about when it’s over and done with and you’ve come out the other side.

“It sounds lame, but I now cannot function without doing stand-up at least once a week.”

“It’s just me and my life,” said Jorik, “I was always seen as the weird one. I envy my brother because he is able to go to work then go out at the weekend and have a nice time and live. He runs the supply department for care homes for children with severe disabilities. He’s really happy and is able to function. I have to pretend to be a person. When you do comedy you can sometimes take a step back and just observe: OK. This is functional behaviour. That’s why I want to get into academia as well.

“I could never envisage a life for myself in Holland. I don’t mean being happy – because that’s never going to happen – but just to be functional, just to be working…”